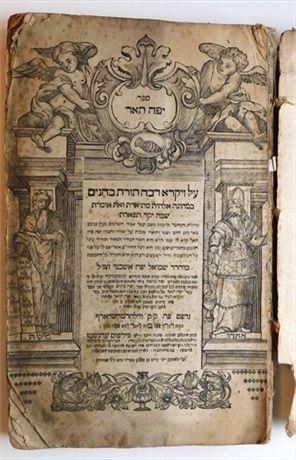 Homiletic exegesis on Midrash Rabbah Leviticus by R. Samuel Jaffe b. Isaac Ashkenazi (16th century), rabbi in Constantinople. He wrote a number of works, some of which are still in manuscript. Most of them are homiletic commentaries on the major Midrashim: e.g., Yefeh To'ar (Genesis, Venice 1597–1606; Exodus, ibid. 1657; Leviticus, Constantinople 1648), and Yefeh Anaf (Frankfort, 1696), an exposition of the Midrash Rabbah on the five scrolls. Most of his writings in halakhah are unpublished. His responsa, however, were often quoted by 17th-century authorities.

Wilhermsdorf was a center of Hebrew printing in Bavaria, where Isaac b. Judah Loeb Yuedels set up a press in 1669 with staff recruited from Prague, among them his daughters as setters and a son-in-law as proofreader. Another Prague printer, Israel Meir, set up a press in 1712 but sold it the same year to Hirsch b. Hayyim of Fuerth, whose son worked later in Fuerth, printing until 1739. Hirsch cultivated book decorations: his printer's mark was the tree with the serpent and a crab and a lion on each side; the title page showed Moses and Aaron and angels hovering above them and the last page a flower basket as vignette.