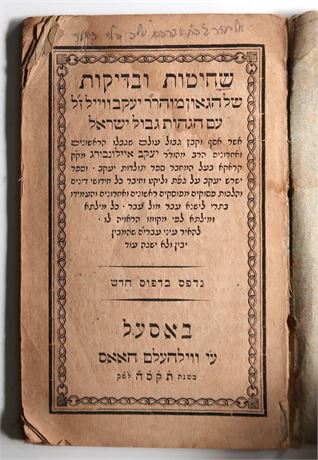 A popular guide for kosher meat slaughterers by R. Jacob b. Judah Weil (d. before 1456), German rabbi and halakhic authority in the first half of 15th century. The name Weil was derived from the town of that name in the Neckar district. R. Weil's main teacher was R. Jacob Moellin (the Maharil), who ordained him and appointed him rabbi of Nuremberg. R. Moellin granted him permission to establish a yeshivah there, but he refrained out of respect for R. Zalman Katz, who had previously been appointed to this office (Responsa Weil, no. 151). It appears, however, that from 1422 he served in both offices. R. Weil also refers to R. Zalman Ronkel of Mainz as "my teacher" and states that he studied in his yeshivah (ibid.). After Nuremberg he was in Augsburg, then in Bamberg for a short period, and from 1444 he was rabbi of Erfurt. Scholars from various communities, including R. Israel Isserlein, addressed their halakhic problems to him. R. Weil became renowned through his volume of responsa (Venice, 1523, frequently republished) which contains 193 responsa. They were copied during his lifetime and some are found among the responsa collections of other rabbis. Particularly well known is his Hilkhot Shehitah u-Vedikah ("laws of slaughtering and examination"), which was accepted as halakhic practice by the Ashkenazim and has been republished more than 70 times. These laws were first published in his responsa, (Venice, 1549) and various scholars, among them R. Solomon Luria (the Maharshal), added glosses, explanations, and novellae. The section Bedikot (Venice, 1552) was first published separately, but from the Mantua, 1556 edition, it was published together with the laws of slaughtering and given the title Shehitot u-Vedikot.