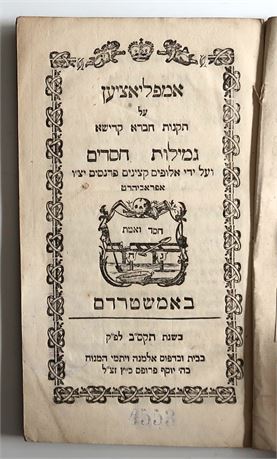 Regulations concerning the Hevra-Kaddisha by the Ashkenazic community in Amsterdam. The first Ashkenazi settlers in Amsterdam arrived in the 1620s. At first they depended socially and economically on the Sephardi community, but were in the same position as to legal status. In 1636 they began to hold their own services and appointed as their rabbi R. Moses b. Jacob Weile of Prague. Their first synagogue was acquired in 1640. The number of Ashkenazi Jews rapidly increased and soon exceeded the Sephardi community. Jews from Poland found their way to Amsterdam after the Chmielnicki massacres in 1648–49, and after the Swedish invasion in 1655. The Polish Jews founded their own congregation in 1660, which maintained ties with the Council of the Four Lands. In 1673, after lengthy negotiations and intervention by the municipal authorities, they were finally forced to join the main Ashkenazi body, then numbering 7,500 members. In 1671 a large and luxurious synagogue was built, and to meet the needs of the growing population, additional Ashkenazi synagogues were built in 1686, 1700, and 1730. Prominent Ashkenazi rabbis included R. David b. Aryeh Leib of Lida (appointed 1680), R. Eleazar b. Samuel of Brody (appointed 1735), and R. Zevi Hirsch b. Jacob Ashkenazi ("Hakham Zevi"), appointed in 1710 but forced to resign later. However, down to 1815 a number of his descendants were Ashkenazi chief rabbis of Amsterdam (his son-in-law R. Aryeh Leib Loewenstamm, (1740–55), his grandson R. Saul Loewenstamm (1755–90), and R. Saul's son R. Moses (1790–1815)).

Hevra-Kaddisha (lit. holy brotherhood), a term originally applied to a mutual benefit society, but now, at least among the Ashkenazi Jews, referring to a brotherhood formed for one purpose only, namely, the reverential disposal of the dead in accordance with Jewish law and tradition. The origin of this restricted use of the term can be found in a passage of the Talmud. The duty of arranging for the disposal of the dead devolved upon the entire community and when a person died the whole population had to abstain from work in order to pay their respects (cf. Jos. Apion 2.27: "All who pass by when one is buried must accompany the funeral"). On one occasion, R. Hamnuna (d. 320) came to a certain place and heard the sound of a funerary bugle. When he saw that the members of the community continued with their avocations he said, "Let them be placed under a ban." They informed him, however, that there was a havurah which occupied itself with this duty, and he permitted the others to continue their work (MK 27b). Another interesting but less certain reference is found in the minor tractate Semahot (chap. 12): "Thus used the havurot to conduct themselves in Jerusalem. Some used to go to the house of mourning, and others to banqueting houses; some to the shevu'a ha-ben (see Circumcision, Folklore), and others to gather up human bones.... the early Hasidim gave preference to the house of mourning over the banqueting houses." Hevra kaddisha in the more restricted sense arose simultaneously in Spain and in Germany at the beginning of the 14th century, and soon was to be found in all communities. It would appear that originally the privileges were confined to the actual members of the hevra. The comment of Rashi to the above-mentioned passage from Mo'ed Katan - "there were associations, each one of which made itself responsible for the burial of its own members" (cf. Tos. Ket. 17a bottom) - no doubt reflects local and contemporary conditions.
The origin of the hevra kaddisha in the sense of a brotherhood which took upon itself the sacred duty of providing for the burial of all members of the community is not known before the 16th century. The first known was established by Eleazar Ashkenazi in Prague in 1564, and the drawing up of the formal takkanot, the regulations of the hevra, was effected by Judah Loew b. Bezalel, also of Prague, in the 17th century. These takkanot, which were confirmed by the Austrian government, laid it down inter alia that its services were available to all members of the community even if they were not members of the hevra and made no contribution toward it. They regulated such matters as the fees to be paid, the allocation of the graves, and the rules for the erection of tombstones.