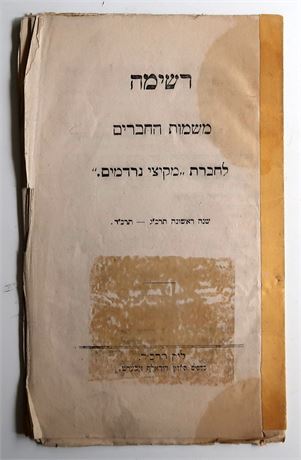 Mekitze Nirdamim ("Rousers of Those Who Slumber") is a literary society dedicated to the retrieval, preservation, and publication of medieval Hebrew texts. Mekitze Nirdamim was first established in Lyck, Prussia in 1861, mainly by the efforts of Eliezer L. Silbermann, editor of the Hebrew weekly Ha-Magid. The Society's first board consisted of prominent scholars and philanthropists such as Rabbi Nathan Marcus Adler, Albert Cohn, S. D. Luzzatto, Moses Montefiore, Michael Sachs, Mattityahu Strashun, and Joseph Zedner.

The organization's focus on realigning Haskalah and tradition among European Jews was met with opposition from some maskilim. By 1864, nonetheless, the number of subscribers stood at 1,200. Among its early publications were Luzzatto's 1864 edition of Judah Halevi's Diwan, Salomon Buber's edition of the Pesikta de-Rav Kahana (1868), and parts of Isaac Lampronti's rabbinic encyclopedia Paḥad Yizhak [he] (1864–74).

The Society became increasingly inactive during the 1870s. After Silbermann's death in 1882, Mekitze Nirdamim was successfully revived at Berlin in 1885 by Abraham Berliner, alongside Moses Levi Ehrenreich, Joseph Derenbourg, David Günzburg, Solomon Joachim Halberstam, Abraham Harkavy, Marcus Jastrow, David Kaufmann, and Mattityahu Strashun. Amid the rise of Nazism in Germany, the Society was moved to Jerusalem in 1934, under the leadership of then-president Aron Freimann.Template:RTemplate:R Agnon served as president of the Society from 1954 to 1970, and was succeeded by Gershom Scholem.