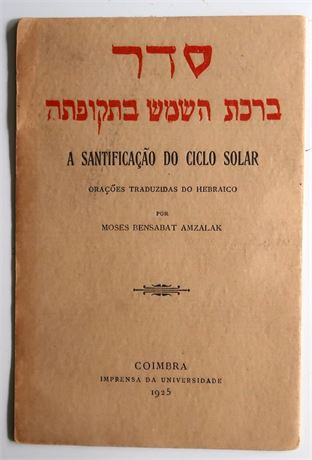 Birkat ha-Hamah (Blessing of the Sun), a prayer service in which the sun is blessed in thanksgiving for its creation and its being set into motion in the firmament on the fourth day of the world (Gen. 1:1619). The ceremony is held once every 28 years. It takes place after the morning prayer, when the sun is about 90° above the eastern horizon, on the first Wednesday of the month of Nisan. The date is based on calculations by the amora Abbaye, according to whom the vernal equinox cycle (called mahzor gadol) always begins then (Ber. 59b). Although Abbaye's method became obsolete after the adoption of R. Adda's calendar, the ceremony has not fallen into desuetude. The order of the recital is as follows: Psalms 84:12, 72:5; 75:2, Malachi 3:20, Psalms 97:6 and 148, the benediction: "Praised be the Maker of creation," which is followed by Psalms 19 and 121, the hymn El Adon (of the Shaharit prayer of the Sabbath), the baraita of Abbaye (Ber. 59b), and the quotation of an aggadah by R. Hananiah b. Akashya (Mak. 3:16). The rite ends with a short thanksgiving prayer in which the congregation expresses gratitude for having been sustained until this day, and the hope to live and reach the days of the Messiah and of the fulfillment of the prophesy of Isaiah "and the light of the sun shall be sevenfold, as the light of the seven days" (Isa. 30:26).

Birkat ha-Hamah (Blessing of the Sun) by Moses Bensabat Amzalak, Portuguese scholar and economist. He was born and educated in Lisbon, combined a successful business career with encyclopedic academic activity, became professor of philosophy and later dean of the Lisbon School of Economics and Finance, and was president of the Portuguese Academy of Sciences and chancellor of the Lisbon Technical University. His main interests were economic history, history of economic thought, and marketing. A devoted Jew, he headed the Lisbon Jewish community for an entire generation. His publications are extensive, extending beyond economics to Oriental languages, Jewish history, bibliography, and related subjects. He wrote on rare works of Judaica of the 17th and 18th centuries in Spanish and Portuguese, which he reproduced in facsimile from the copies in his own extensive library. He wrote works on several economists of Marrano extraction, such as Joseph Penso de la Vega, Duarte Gomez Solis, and Isaac de Pinto.