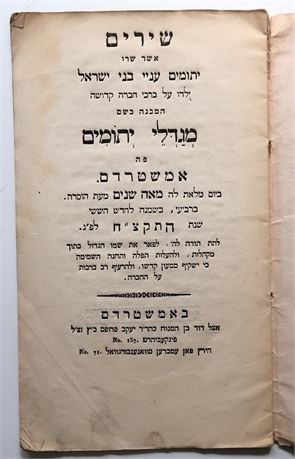 Bilingual  Hebrew Dutch on the two hundredth anniversary of the orphanage for poor Jewish children  in Amsterdam. The title page, entirely in Hebrew, states that it is Shirim, sung by the poor Jewish orphans born on the knees of the Hevra Kedushah called Migadlei Yesomim, in Amsterdam on the day of the two hundredth anniversary of its founding, Wednesday, the eight of the sixth month (Elul) 5598 (August 29, 1838). The title page continues that it gives thanks to the Lord, to glorify his great name, etc. There is an introduction from Abraham ben Daniel דלאווילה, who notes that the verse were set to music by Aaron Berlin and translated into Dutch by Isaac Kalisch. The verse is in Hebrew and Dutch on facing pages, the former in square vocalized letters.

Rules and regulations of the orphan society organized by the Burial Society of Fuerth founded in 1763. Communal concern for orphaned children has deep roots in Jewish tradition, and numerous biblical commandments stress the importance of providing for them. Along with the widow (almanah), resident alien (ger), and Levite (Levi), orphans are to be protected and treated with justice and compassion (Deut. 16:11 and 14; 24:19–21; 26:12–13). Psalm 68:6 describes God as a "father of the fatherless."

Rabbinic Judaism reinforced the individual and communal obligation to meet the needs of orphans. "Whoever brings up an orphan in his home," Sanhedrin 19b states, "it is as though he had begotten him." According to Ketubbot 50a, a man who brings up an orphan boy or orphan girl in his house and enables them to marry, is performing righteousness at all times. The rabbis considered the community responsible for supporting impoverished orphans, including educating them and preparing them for marriage.

In the case of impoverished orphan children whose father left little or no property, the Talmud holds the community responsible for their support, for marrying them off, and for providing them with the means to live economically independent lives. Communal funds were to be used to rent and furnish a house for a young man, and to fit out a girl with clothing and a minimum dowry. If the communal funds were low, the orphan girl was given priority over the boy. If the community chest could afford to do so, the provisions provided for the orphan were made in accordance with his social position and the former manner of life to which he had been accustomed (M. Ket. 6:5 and tb Ket. 67b).