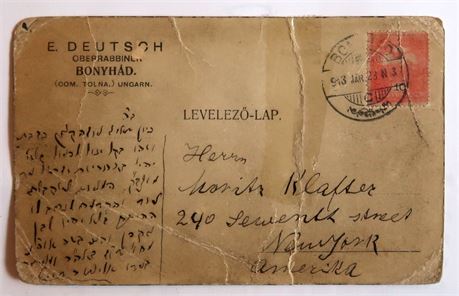 Letter by R. Eliezer Hayyim ben Abraham Deutsch (1850–1916) was a Hungarian talmudist and author. He was born in Petra, near Kaschaua and studied under. Menahem Eisenstadt of Ungvar, Judah Aszod, and R. Solomon Ganzfried. R. Deutsch was a supporter of the Moriah association for the advancement of Orthodox Judaism, founded in 1905 by Meir Lerner in Altona. A prolific writer, his books, in addition to Peri ha-Sadeh, are Tevu'ot ha-Sadeh in six parts (1892–1904), novellae on talmudic themes with responsa appended to each part; Helkat ha-Sadeh (1901), glosses and notes on the Ara de-Rabbanan of Israel Jacob Algazi; Si'ah ha-Sadeh (1914), aggadic novellae on the Torah and for festivals. Published posthumously are: Zemah ha-Sadeh (1917), novellae and responsa on the problems of agunot; and Duda'ei ha-Sadeh (1929, published by his son, Moses), responsa and a selection of rulings with respect to the laws of mourning. In the Yizrah Or of David Meldola, there is an appendix by R. Deutsch, Omer ha-Sadeh, that comprises the laws for determining the New Moon. Halakhic queries were addressed to R. Deutsch from many parts of the world.