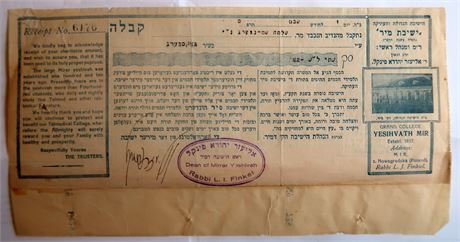 Receipt by R. Eliezer Judah Finkel, Rosh Yeshiva of the Mir. He received his early education from his father R. Nathan Zevi Finkel, known as the “Sabba [“grand old man”] of Slobodka.” He continued his studies at some of the famous Lithuanian yeshivot, including Slobodka, Radin, and Mir. He married the daughter of R. Elijah Baruch Kamai, head of Mir yeshiva, who appointed him his deputy, and in 1907 he succeeded him. He devoted himself completely to the dissemination of Torah in his own yeshiva and elsewhere, revealing a talent as teacher, spiritual guide, and administrator. His great abilities were particularly manifest when the yeshiva was destroyed by fire in 1911. Within a short time he succeeded in rebuilding and extending it. His preaching and influence reached people in all sections of society. On the outbreak of World War I, he had to leave Mir and wandered throughout Russia, everywhere gathering students around him. In 1922 he accepted an invitation from the heads of the Mir yeshiva to return as its chief spiritual director. Thousands of students flocked there, making it one of the greatest in the world. When World War II broke out, he again was obliged to move from place to place with his students, finally settling in Jerusalem. There he was active in “Mir” and “Hebron” yeshivot and was esteemed as the “zekan rashei yeshivot” (the senior rosh yeshiva). The leading rabbis of his generation, including the Hafez Hayyim and R. Hayyim Ozer Grodzinski, gave him every support and encouragement. His monumental work Divrei Eli'ezer (1963) on the Talmud made an impression in scholarly circles.