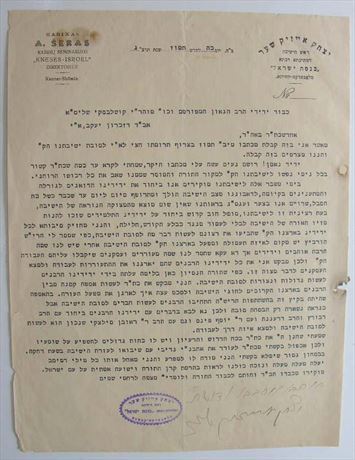 Letter by R. Hayyim Isaac Eisig b. Joseph Sher (1875-1952) was born in Halusk, Lithuania. In his youth he studied with R. Baruch Bar Leibowitz at Valosk, and later at Volozhin. He was the son-in-law of R. Nathan Zavi Finkel the founder of the world renown Slabodka Yeshiva, Keneset lsrael. He appointed R. Sher Rosh ha-Yeshiva in 1909 as a young man. The yeshivah under his leadership, continued its activities until June 23, 1941, when the Nazi invasion was imminent. Although most of the faculty and students perished during the Holocaust, the Slobodka yeshivah was reopened in Bene-Berak following the conclusion of the war. R. Sher passed on in Bnei Brak.