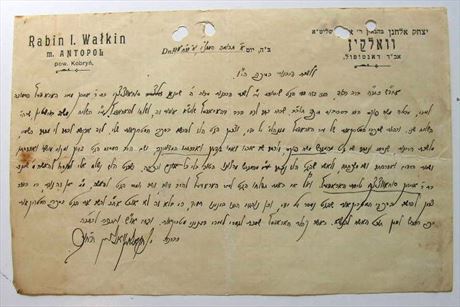 R. Yitshak Elhanan Walkin was born in 1900 to his father, the luminary R. Aharon Walkin, and his mother, the daughter of R. Ben-Tsiyon Sorotskin.

In addition to his devotion to his studies, he was devoted to his friends and helped them in difficult situations, especially at the time of the typhus epidemic. He finally got that also. When he was well, he returned to Lithuania. There he taught for a certain time in the elementary school of Kelm. When the rabbinical seminary of Mir returned to its usual place, he also returned to it.

When R. Mosheh Wulfson died, R. Yitshak Elhanan married his daughter Shifrah and also inherited the rabbinical post in Antopol. He was busy in communal service and was beloved by young and old. When the Second World War broke out and the Bolsheviks entered town, he did part of his work secretly. However, when the Nazis entered, R. Yitshak Elhanan died together with his community.