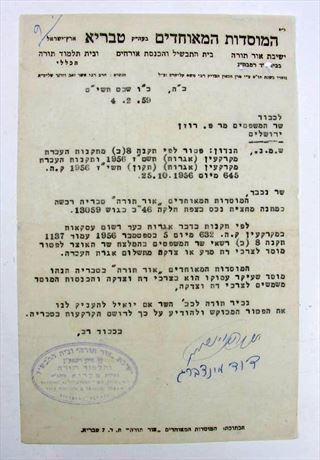 Letter signed by R. Abraham b. Noah Weinberg of Slonim (1889-1981) settled in Tiberias where he led the Yeshiva Ohr Torah. In 1955, after the passing of R. Mordecai Hayyim of Slonim, the Hasidim elected R. Abraham, who had immigrated to Ereẓ Israel in his youth, as their Admor. An erudite scholar he attracted many disciples who sought his blessings and advice. His teachings were published as Birkhat Avraham.