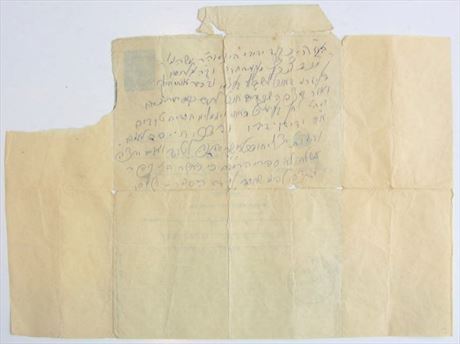 Airmail letter, 274:185 mm., creased and starting on folds, ink on paper, all in the Admor's hand, signed, postal stamp dated.

Letter by R. Mordechai Chaim Slonim of Tiberias. He was the grandson of the Yesod HaAvodah's brother, disciple of the Beis Avraham, successor of R. Shlomo David Yehoshua Weinberg. After the war, the Slonim Hasidim crowned R.i Mordechai Chaim Slonim (Kestilnitz) as their master and named him 'Reb Mottel Dayan'. Although he refused to officially be named Hasidic Master, in reality he led the Hasidim until his passing on the 12th of Tevet, 5714 – 1953. He was succeeded by R. Avraham Weinberg (the third), a son of R. Noach Weinberg and a great-grandson of the founder of the Slonim dynasty.

During his 27 years of leadership he restored the glory of the Slonim dynasty that had been almost totally destroyed during the war and rebuilt it with love and devotion. R. Avraham was also one of the founders of the Orthodox educational network and served as a member of the Council of the Leading Rabbis. He passed away on the 12th of Sivan, 5741 – 1981. His commentaries were collected in the books 'Beis Avraham' and 'Nachal Eytan'