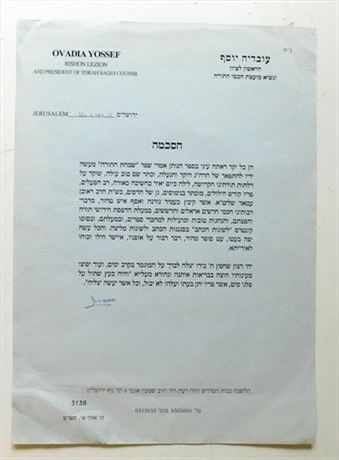 Letter by R. Ovadia Yosef (1920-2013). R. Yosef was born in Baghdad, but when four years old he was taken to Jerusalem. At the age of 20, he was ordained rabbi by R. Ben-Zion Meir Ouziel. In 1945 he was appointed a dayyan in the bet din of the Sephardim in Jerusalem. In 1947 he was elected head of the bet din of Cairo and deputy chief rabbi of Egypt. During the period of his rabbinate in Egypt he displayed great courage and national pride; he refused to issue proclamations against the State of Israel, forbade contributions for military equipment for the Egyptian army, and also insisted on his right to preach in Hebrew. In 1950, he returned to the young state of Israel and was appointed a member of the rabbinical court of Petah Tikvah and of Jerusalem (1958–65). In 1965 he was appointed a member of the Supreme Rabbinical Court of Appeals in Jerusalem, and in 1968, Sephardi chief rabbi of Tel Aviv-Jaffa. On October 16, 1972, R. Yosef was elected Sephardi Chief Rabbi of Israel (Rishon Le-Zion), a position he held until 1983. He is the spiritual guide of the Shas party.

A prolific writer of halakhic works, R. Ovadiah published his first work, Yabbi'a Omer, at the age of 18 on themes in tractate Horayot, and he used the same title for many subsequent works (which appeared in Jerusalem in 1954, 1956, 1960, 1964, and 1969). In 1970 he was awarded the Israel Prize for Torah literature. R. Yosef's works are distinguished by their erudition. He is at home both with the Sephardi and Ashkenazi authorities to whom he gives equal weight. His rulings are clear and direct. In general he inclined to leniency in his rulings. Yosef also headed the yeshiva Torah ve-Hora'ah - the Tel Aviv branch of the yeshiva Porat Yosef - as well as the institute for dayyanim established by him in Tel Aviv.

R. Yosef has emerged as one of the most powerful figures on Israel's political and cultural scene. Aside from trying to organize Sephardi Jews politically, he has sought to gain equality or even superiority for Sephardi religious interpretations. In these efforts, he has enjoyed a fair degree of success and has changed Israeli society and the self-perception of much of its population.