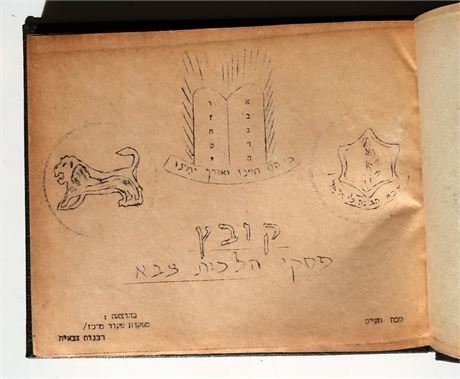 Comprehensive collection of Halakhot applicable  for soldiers, assembled by R. Shlomo Goren (1917–1994), Israel chief rabbi. Born in Zambrow, Poland, he was taken in 1925 to Palestine where his father was one of the founders of Kefar Hasidim. At the age of 12, Goren entered the Hebron Yeshivah in Jerusalem where he soon became famous as a prodigy. He published his first work, entitled Nezer ha-Kodesh (1935) on Maimonides' Mishneh Torah, at the age of 17. In 1939, R. Goren published Sha'arei Tohorah on the laws of mikveh. He joined the Haganah in 1936, and fought in the Jerusalem area during the War of Independence. During this war, he was appointed by the two chief rabbis, Herzog and Ouziel, as chief chaplain of the newly formed army. He subsequently distinguished himself for his bravery, qualified as a paratrooper, and rose to the rank of brigadier-general. He accompanied the troops during both the Sinai Campaign and the Six-Day War, and was the first to conduct a prayer service at the liberated Western Wall in 1967. R. Goren was responsible for the organization of the military chaplaincy and worked out the regulations for total religious observance in the army. He was responsible for numerous original responsa concerning specific problems of observance due to conditions of active warfare and technological progress. He also developed the principles for permitting the assumed widows (agunot) of missing soldiers to remarry. Particularly noteworthy were his decisions permitting the remarriage of the widows of those men who perished on the destroyer Eilat and the submarine Dakar in 1967/8.

In 1961 Goren received the Israel Prize for the first volume (on the order Berakhot) of his comprehensive commentary on the Jerusalem Talmud, entitled Yerushalmi ha-Meforash (1961). A collection of his halakhic and philosophical essays, mainly concerning the Festivals and Holy Days, was published in 1964 under the title of Torat ha-Mo'adim. In 1968, he was elected Ashkenazi chief rabbi of Tel Aviv-Jaffa, taking up his duties only in 1971, and on October 16, 1972, was elected Ashkenazi Chief Rabbi of Israel.

Shortly after his election he was involved in a violent controversy stemming from the unconventional manner in which he solved the problem of a brother and sister who had been declared mamzerim by the rabbinical courts, including the Bet Din of Appeals. He obtained the assent of an ad hoc bet din which he set up to an opinion he had published (in a limited edition) that they were free from the taint of mamzerut and arranged their immediate marriages. The secrecy surrounding the military-like operation and his refusal to reveal the names of the dayyanim aroused violent opposition from the heads of the yeshivot and prominent rabbis, including the Lubavich Rabbi. He published a detailed volume consisting of 200 pages (Pesak Din B'Inyan ha-Ah ve-ha-Ahot, Jerusalem, 1973), to justify his ruling.

In April 1980 a law was passed by the Knesset issuing new regulations with regard to the future of the Chief Rabbinate. It included a provision that the period of service of both incumbents be extended to 1983, after which, however, they would be precluded from offering themselves for reelection.

During the summer of 1981 R. Goren became involved in a public controversy over his ruling that Area G in the archaeological excavations in the City of David near the Western Wall had been the site of an ancient Jewish cemetery and that no excavations should be undertaken there. The Israeli academic world rejected that claim and leading scholars stated that no Jewish cemetery had been there in the past. A special session of the Knesset was called during the summer recess, but no action was taken. Work was suspended in the area for a few weeks by order of the Minister of Education and Culture Zevulun Hammer and the Supreme Court was asked to rule on the situation. On September 15, 1981, the Supreme Court made known its decision that the rabbinate has no legal right to determine state policy. The season's excavational work ended soon thereafter. Further studies are to be made to determine whether or not the area in question was ever a Jewish cemetery.