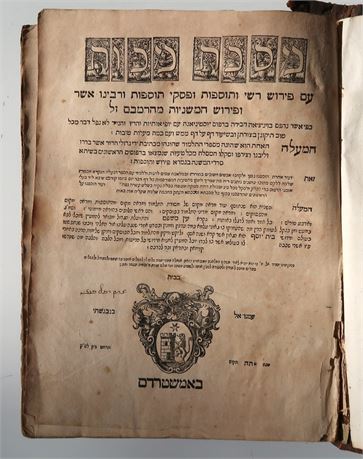 Babylonian Talmud, Tractates Makkot, Shavu'ot, Horayot, Eduyot, Avot, Avodah Zarah. Small folio edition of the Talmud, most notable for the restoration of some material expurgated from the Basle Talmud. The printer, Immanuel (Emanuel de) Benveniste, was the scion of a distinguished Sephardic family that was among the Jewish refugees from the Iberian Peninsula. Benveniste mastered the printer's craft in his birthplace, Venice, and later settled in Amsterdam.

Despite the assertion on the title page that this edition follows the Giustiniani printing, Rabbinovicz contends that it was in fact based on the Lublin edition, which, in turn, was based on the heavily censored Basle edition. He bases this on the appearance in this edition of numerous alterations made to the Basle and, subsequently, Lublin editions. However, Rabbinovicz does cite instances where Benveniste made use of other editions. For example, Bava Batra is printed with Hikor Dinnim and Avodah Zarah includes Kitzur Piskei ha-Rosh, both from the Giustiniani edition of the Talmud. Also, Maimonides' Mishnah commentary is, with the exception of Berakhot, printed after each tract ate in the same manner as in the Bomberg editions, that is, only with the first lines of the Mishnah.

Avraham Habermann writes that Benveniste was a distinguished printer, and that "the crowning glory of his work was his Talmud edition, printed in 1644-1648, which had many supplements not in previous editions." The Benveniste edition of the Talmud has been praised for restoring expurgated material. Indeed, when the Frankfurt-am-Oder Talmud (1697-1699) was printed, that Talmud's deficiencies were corrected based on this edition.

The title pages of tractates have the Benveniste printer's mark, an upright lion facing inward towards a tower; a star is above the lion and the tower. The lion is on the viewer's right, the tower on the left. This device appears within an ornamental shield with a helmet at the crest. In Benveniste's other books it appears at the apex of an architectural frame about the text of the title page. This device was sufficiently popular that printers often reused it in the seventeenth and eighteenth centuries, in such diverse locations as Amsterdam, Hamburg, Dessau, Halle, Kothen, Jessnitz, and Zolkiew. It was also used as the insignia of the Horev press in the twentieth century. In 1714, two rival editions of the Talmud were begun in Amsterdam, both with the Benveniste device on their title pages.

We are unusually well informed about the activities of the Benveniste press. Unlike earlier Talmud editions, where the press run can only be estimated, we know that Benveniste printed 3,000 copies, a single complete Talmud consisting of 5,940 folios. This is a significantly larger number of copies than were printed in the incunabula editions, at approximately 300 copies for a press run, and the early sixteenth century editions, estimated at 1,000-1,500 copies. At this time, editions of Hebrew titles varied from a low of 475 to a high of 10,000, with 3,000 copies being the average. Benveniste was also capable of much larger press runs. In 1643 he arranged with the Christian binders Magnus and Spanceerder to deliver within six weeks 8,000 bound prayerbooks that he had printed.