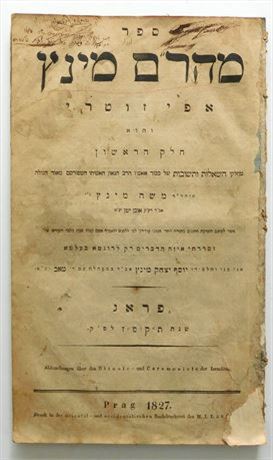 R. Moses b. Isaac ha-Levi Minz (Muenz) (c. 1750–1831), rabbi of Alt-Ofen. R. Minz was born in Podolia or in Galicia and educated in the yeshiva of R. Meshullem Igra. He served for a period as judge in Pressburg. After his marriage he served as rabbi in Vishravitz and in Brody and was appointed in 1789 rabbi of Alt-Ofen (Obuda) where he remained for the rest of his life. As a result of his activity there and his great reputation, the community became renowned. He represented the community at all royal ceremonies, including the coronation of Francis I. The addresses he delivered on those occasions were published in Hebrew and German. In 1793 he was appointed by the government chief rabbi of the whole Pest region. By virtue of this appointment he was granted the right to serve as Jewish judge in all the judicial affairs of the communities in the area, and not only in religious matters. This right was limited in 1796, but it did not affect the prestige in which he was held. On his initiative, and as a result of his endeavor, a beautiful synagogue was built by the community in 1822. It is still standing and has been proclaimed by the Hungarian government as a protected historical site. The sermon he preached at its consecration, Devir ha-Bayit, was published that same year in Vienna.

During the period of R. Minz's rabbinate, tendencies toward religious reform began to be manifested in Hungary. R. Muenz took a strong stand against their aspirations in general and against Chorin in particular. In 1803 Chorin's book Emek ha-Shaveh appeared with the commendation of R. Minz, but by 1805 R. Minz was presiding over the bet din that summoned Chorin before it and rebuked him sharply, compelling him to rescind his progressive attitudes. Although the civil government revoked the ruling of rabbis headed by R. Minz it was supported by the Orthodox community. Orthodox Jews of Budapest used to visit his grave in the cemetery of Alt-Ofen during the days of Elul and of selihot. In 1949 this cemetery was cleared by order of the government and R. Minz's remains and the tombstones were transferred to another cemetery in Budapest and reinterred near the graves of those killed by the Nazis, where the custom of visiting his grave continues.

An erudite scholar, his responsa appears in many period works. His opinion was highly valued by the Hatam Sofer who corresponded with him on many occasions. A small amount of his responsa were published by his son R. Joseph Isaac, under the title Sefer Maharam Minz (Prague, 1827) which continues to be a fundamental text for any rabbinical library. He also published, with his annotations, Peri Ya'akov (Ofen, 1830) of R. Jacob ben Moses.