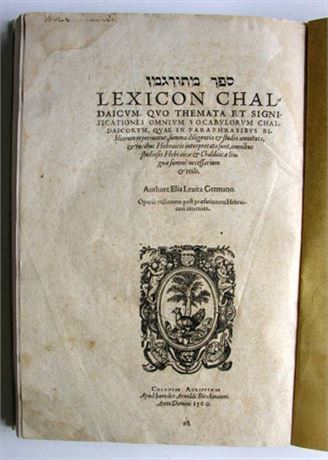 Rare - no copy in many major collections. The 1541 Isny edition with a new title. Fagius was unable to sell the entire 1541 run and sold the remainder to Birckmann in 1560 who suffered an equal fate.

Chaldic dictionary by R. Elijah Levita (Bahur; ben Asher ha-Levi Ashkenazi; 1468 or 1469–1549), Hebrew philologist, grammarian, and lexicographer. Born in Neustadt, near Nuremberg, Germany, he spent most of his life in Italy (Padua, Venice, and Rome) where he taught Hebrew language and grammar. His pupils included Christian humanists, from whom he learned Greek and Latin. Among his pupils he counted Sebastian Muenster, who translated Elijah's works into Latin, and Cardinal Egidius da Viterbo in whose home in Rome Elijah stayed for 13 years (1514–27). Before entering the house of Egidius da Viterbo, Elijah also wrote secular literary works in Yiddish. Georges de Selve, another of his pupils, who later became the French ambassador to Venice invited him, in the name of King Francis I, to lecture in Hebrew at the CollIge royal in Paris. He declined the offer for two reasons: he neither wanted to be the only Jew allowed to live in France, nor did he feel that under such conditions he could observe the religious precepts. In 1527, when Rome was sacked by the armies of Charles V, Elijah lost all his property (including some manuscripts). He returned to Venice, where he earned his livelihood as a proofreader in the publishing house of Daniel Bomberg (1529 to the late 1530s), and remained here, except for an absence of four years (1539/40–44). During that period, he supervised Fagius's press at Isny (in Wuerttemberg), and later accompanied him to Constance (1542–43). At Isny, Levita printed some of his most important works. The rabbis looked with disfavor on Elijah's teaching gentiles the Torah. Elijah rejoined with the claim that earlier Christian Hebraists had upheld Christian and Jewish Hebrew scholarship resulting in a tendency, on their part, to defend Jews and the Jewish community also from physical violence. Two of Elijah's grandchildren, however, converted to Christianity and helped those who calumniated the Talmud. One of them, baptized as Vittorio Eliano, became an ecclesiastical censor of Hebrew books and had some part in the Cremona (Christian) edition of the Zohar (1558–59). Elijah, despite false allegations brought against him to the contrary, remained an observant Jew.

Elijah wrote many Hebrew grammar works, Hebrew and Aramaic dictionaries, and did masoretic research. In Hebrew grammar, he followed the line of thought of the Kimhis: he published Moses Kimhi's Mahalakh, with his own commentary (Pesaro, 1508; in this edition the name of the author is mistakenly given as Benjamin of Rome); and wrote notes and critiques, "Nimmukim" (unpublished), on David Kimhi's Mikhlol and on his Sefer ha-Shorashim. His own works, written and published in Rome between 1518–19, and translated into Latin by Sebastian Muenster, are: Sefer ha-Harkavah (1518); Ha-Bahur (1518; the title is after his own name "R. Elijah Bahur"); and Lu'ah be-Dikduk ha-Pe'alim ve-ha-Binyanim (unpublished). Ha-Harkavah deals with "the grammar of every foreign and compound word" in the Bible, listed in alphabetical order, and the grammar of the noun and the verb. In Ha-Bahur, which in a later edition became known as Dikduk Eliyyah ha-Levi (Isny, 1542), there is an allusion to the name of the author: "Since for every young man it [the book] is good and 'chosen.' And I, my name is Bahur [= "chosen"], therefore Bahur have I called it." In Rome in 1520, he published Pirkei Eliyahu, a work, written partly in verse, on the grammar of the Hebrew letters and vowels; it is a follow-up of Ha-Bahur and completes the study in the latter. In its second edition (Venice, 1546), he added some chapters on the pattern of the nouns and the formative letters. Elijah did not introduce many innovations in his grammatical system; its easy and clear presentation, however, was instrumental in spreading the knowledge of the Hebrew language and grammar among Jews and Christian humanists. His grammatical rule on the five classes of sheva-na is still accepted today. His Masoret ha-Masoret (Venice, 1538), in which he explains the technical terms and the signs of the masorah, is an important contribution to masoretic study. The preface, written in prose (which follows the foreword in verse and the rhymed introduction), is an historical and original research in Hebrew vocalization and accentuation, and in the masorah. Elijah was the first to point out that the vowels and accents did not originate in the Sinai period but in post-talmudic times. In his work Tuv Ta'am (Venice, 1538), Elijah attempted to explain the rules on the accents in the Bible: their grammatical value and their relationship to each other. His dictionary, compiled from the Aramaic translations of the Bible, Meturgeman ("The Interpreter," with a Latin foreword by Paulus Fagius), and his lexicon of the Hebrew words in the Talmud and the Hebrew of the Middle Ages Tishbi, with a Latin translation by Fagius (Isny, 1541), are of major importance in the research of Hebrew grammar. Tishbi is a source on the pronunciation and the vocalization of Hebrew by the German and Italian Jewish communities. Levita's Meturgeman and Tishbi were extensively used by Christian Hebraists such as Guy Le FIvre de la Boderie, a pupil of Postel, who makes glowing reference to Levita in the preface to his Dictionarium Syro-Chaldaicum (in the Antwerp Polyglot Bible, 1572). Elijah also composed a concordance to the Bible, Sefer ha-Zikhronot (the complete work was never published; see Frensdorff, in MGWJ, 12 (1863), 96–108).

His research into the Hebrew language laid the foundations for the lexicography and etymology of Yiddish. Elijah refers to Yiddish as the "language of Ashkenaz" (Germany) or "Deutsch"; his reference in fact is only to the German dialect used by Jews. Shemot Devarim (Isny, 1542) is the first known Yiddish-Hebrew dictionary. It lists 985 words with their Hebrew translation, as well as Latin and German by Paulus Fagius. In Tishbi, where Elijah concludes each entry with the translation of the Hebrew radicals into German (he also does this to a certain extent in the Meturgeman), there are etymological explanations of several Yiddish words (such as katavos, meykn, shekhtn); two (mashkeyt, sargenes) are even included in the 712 entries of the dictionary. His Yiddish translation of Psalms (Venice, 1545), the first to be published, is based on earlier translations which closely followed the Hebrew text; it became a popular work, went through several editions, and served as a model to other translators.