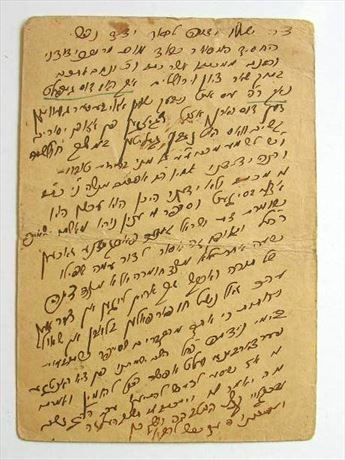 Letter by R. Aaron b. Samuel Jacob Roth (1894-1947), Admor of Shomrei Amunim-Toldot Aaron in Jerusalem. The letters, addressed to two different students and disciples, ask the reader to assist the letter holder. Not having funds to buy two sheets the Rebbe wrote the letters back to back.

He was born in Uzgorod and at the age of nine, he was sent to study at the yeshivah of R. Joseph Rothenberg in Krasnoye. Later he attended yeshivot in Galicia, and for four years studied under R. Yeshayahu Zilberstein and R. Moses Forhand in Vaitzan in central Hungary. During the First World War he lived in Hungary and befriended the rabbis who sought refuge in Budapest. Among them were R. Issachar Dov Rokeah of Belz, R. Israel Hager of Vishnitz, and, above all, R. Tzvi Elimelekh Spiro of Blazowa, who called R. Arele a "Good Jew" and urged him to become a rebbe.

After his marriage, at the age of twenty two, to Sima, the daughter of R. Yitzhak Katz of Budapest, he lived for a time in Satmar and acquired a small group of followers. In 1925 he went to the Holy Land, where, in Jerusalem, he formed a hasidic group. In 1929, he returned for medical reasons to Satmar, where the "self-appointed rabbi" aroused much antagonism. He was forced to leave Satmar for Beregszaz (Beregovo), where he established a yeshiva Shomrei Emunim, which was supported by R. Hayyim Elazar Shapira of Munkacs, and in which eighty students studied.

In 1939, he returned to the Holy Land, where he established a close-knit community under the name Toldot Aaron. He was a strong opponent of Zionism. He stressed the importance of ecstatic prayer. He urged his followers to lead a disciplined life. He advocated asceticism and laid down meticulous rules governing the community's way of life: men were not allowed to shave their beard or trim their sidelocks; women were required to cut their hair after marriage and to keep their head covered with a kerchief.