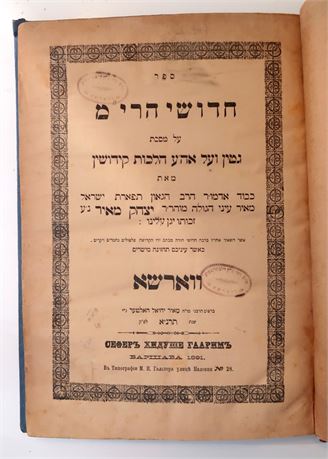 Novella by R. Judah Arye Loeb Alter (1847–1905), Admor of Gur. The son of R. Abraham Mordecai (the eldest son of R. Isaac Meir), was orphaned as a child and brought up and educated largely by his grandfather. In 1870, after the death of R. Hanokh of Aleksandrow, the successor of R. Isaac Meir as Gur rabbi, R. Judah Aryeh Leib became the Admor of Gur. In this position he wielded a wide influence and established the leadership of Gur Hasidism in Congress Poland. A distinguished scholar, modest in behavior, R. Judah Aryeh Leib won the confidence of rabbis and communal leaders throughout Jewry. Like his grandfather he also played a role in public affairs, concerning himself with contemporary Polish Jewish problems. Through his influence Hasidism in Poland dissociated itself from Zionism. R. Judah Aryeh Leib devoted much energy promoting Torah study and attracted many of the youth. His writings are collected under the title Sefat Emet (2 vols., 1905–08), after which he is also known. The five sections on the Pentateuch include addresses on Sabbaths and festivals, distinguished by the profundity of their ideas and clarity of exposition, and reflect the marked influence of R. Judah Loew b. Bezalel (the Maharal) of Prague. The sections on the Talmud, on tractates Mo'ed and Kiddushin, evidence his wide Jewish scholarship and ability to penetrate to the intended meaning and provide a lucid exposition of the problem, in contrast to the dialectical pilpul method followed by his grandfather.