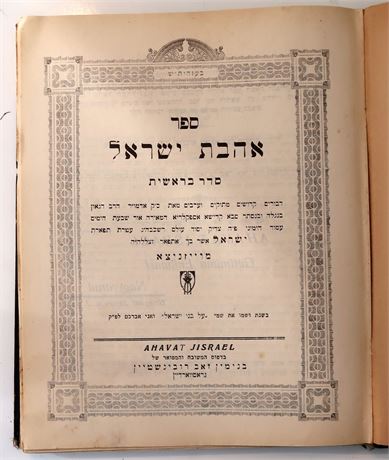 Only edition of these important hassidic discourses on Bereshit by R. Israel ben Baruch Hager, Vishnitzer Rebbe, known by the name of this book, Ahavat Yisrael.. The title page is dated with the chronogram “And they shall put my name upon the people of Israel; and I will bless them” (Numbers 6:27). There is an introduction by the rebbe’s son and then the text in two columns in rabbinic letters.

R. Hager (c. 1860-1937), eldest son of R. Baruch, received ordination from R. BErish Wiedenfeld and R. Ezekiel of Sianiawa. He married the daughter of Rabbi Meir Horowitz of Dzikov. And when she died he married Mariam, daughter of R. Jacob Khanah. In 1875 R. Hager moved to his father-in-laws house and studied at great length with his brother-in-law Rabbi Yehoshua of Dzikov. 3 years later he returned to Vyzhnytsia and became very close to his grandfather, Rabbi Menachem Mendel Hager. In 1893 he was appointed as rebbe in Vyzhnytsia. The young rebbe invigorated new life into the chassidus and it attracted many more followers from the surrounding provinces. He established many Talmud Torahs and also a yeshiva to which he appointed his son Rabbi Menachem Mendel as rosh yeshiva. When the First World War broke out he was forced to move to Grosswardein. He lived there until his death in 1936. In 1949, his remains were transferred to Israel and re-interred in Zichron Meir. His sons were Reb Menachem Mendel of Visheve, Reb Chaim Meir, who inherited his fathers position in Grosswardein; Reb Eliezer of Vyzhnytsia; Reb Boruch of Siret and Reb Shmuel Abba who died young. He also had six daughters. R. Hager was known for his sweet and unassuming personality, as well as having a phenomenal memory. He would recite the entire book of Psalms daily before prayers.