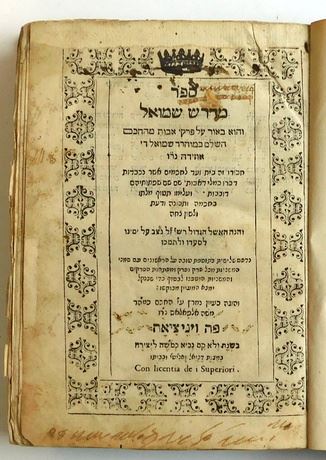 R. Samuel ben Isaac Uzedah (1540–?), talmudist, preacher, and kabbalist. R. Uceda, who was born in Safed, studied Kabbalah under R. Isaac Luria. After the latter's death, he studied under R. Luria's disciple R. Hayyim Vital and R. Elisha Gallico. At the age of 40, he established a great yeshivah in Safed where Talmud and Kabbalah were taught. The yeshivah was supported by the Nasi family of Constantinople. R. Uceda also spent some time as a merchant in Aleppo. In 1597, when the financial resources of the yeshivah were depleted, he went to Constantinople in an attempt to raise funds. There he was helped by the philanthropist and scholar Abraham Algazi. R. Uceda was apparently the owner of a large library which contained many manuscripts.

In his Midrash Shemu'el (Venice, 1579), a commentary on the tractate Avot, he quotes some of the early Spanish scholars and his contemporaries from books which were in his possession. He also wrote a commentary on the Five Scrolls. The commentary on Ruth was published as Iggeret Shemu'el (Kuru-Chesme, near Constantinople, 1597). It includes sayings of early Spanish scholars and of R. Uceda's contemporaries. His commentary on Lamentations was published as Lehem Dimah (Venice, 1606). His books had wide circulation and his commentary on Avot was printed three times during his life. His sermons are to be found in manuscript (Moscow, Guenzburg Ms. 1054).