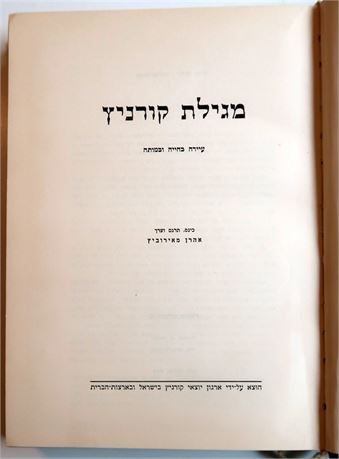 Only edition of history of Kurenits (Kuraniec, Belarus) pre and during the Holocaust. Over the last few hundred years, Kurenets was
at various times located in Poland, Lithuania, and Russia/Soviet Union. Since at least the mid-17th Century, Jews had been living in Kurenets. In 1867, out of a total population in the village of 1955 people, 1325 were Jews (over 2/3 Jewish). Before the turn of the 20th century, this was shtetle like so many other shtetles in the pale of settlement, where there were farmers, tailors, traders, milkmen and shopkeepers. Kurenets was somewhat unique from other shtetls in that it more Hasidic. One Kurenets son married the daughter of the Lubavitcher Rebbe in 1850. Kurenets had
three shuls before the war, two Hasidic and one Mitnagim. There were many torah scholars in the town, and many Zionists, including a Hashomer Hatzier group and others. There was also a Gimlut Chesed – Interest Free Loan Society.