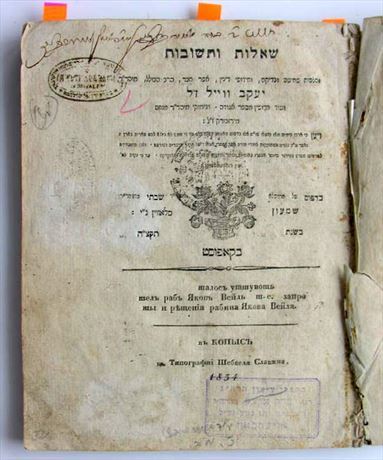 [1], 69 ff., quarto, 216:173 mm., usual light age staining, wide margins, old hands. A very good copy loose in contemporary marbled paper over boards, rubbed and split.
The copy of R. Meir b. Isaac Auerbach (1815–1878), rabbi of Jerusalem, with his notes on several pp. R. Auerbach was born in Dobra, central Poland, and served as rabbi of the Polish towns of Kowal, Kolo, and Kalish (Kalisz). In 1860 he migrated to Jerusalem where, at the request of Samuel Salant, one of the leading Jerusalem rabbis, he was elected rabbi of the Ashkenazi congregation. He refused to accept a salary, living on the great wealth he had brought with him. "The rabbi of Kalish," as he was usually called in Jerusalem, was noted for his efforts to develop Jewish settlement in Erez Israel and to extend and strengthen the Jewish settlement in Jerusalem. He headed a society which attempted unsuccessfully to purchase land in Jericho for an agricultural settlement. In Jerusalem he gave generous aid to various charitable institutions and supported such projects as arranging the affairs of the halukkah, founding the general council of Keneset Yisrael, and the yeshivah Ohel Ya'akov. One of the founders of the Me'ah She'arim quarter, he was a vigilant defender of tradition, and fought vehemently against reformers, especially the supporters of secular education in Jerusalem. He was author of Imrei Binah, novellae on the Shulhan Arukh and responsa on Orah Hayyim and on Hoshen Mishpat (pts. l, 2, Jerusalem, 1869–76); part 3, novellae to Even ha-Ezer and part 4, glosses on the Talmud and on Maimonides' Mishneh Torah, as well as sermons, were not published. His glosses to R. Aryeh Leib Ginsburg's Turei Even were published along with that work in 1860.

Important responsa by R. Jacob Weil. Apart from their halakhic importance R. Weil's responsa are a valuable source for the social and religious history of German Jewry. They reflect the various problems that occupied the Jews of Germany during his era and in particular throw light on the internal organization of the communities. Particularly noteworthy is his responsum in connection with the rabbinic office. In his view the claim of presumptive right (hazakah) does not apply to the rabbinical office, and any scholar has the right to take up residence in a town where there is a rabbi whose authority has been accepted by the community and may act as rabbi in the same manner as the incumbent; "and we have also seen in our own generation several places where there are two rabbis and we have never heard that one had a greater right than the other" (Responsum 151). In one responsum he complains about the decline in the honor of the rabbinate and attacks those rabbis "who declare their own importance [and] administer their office in a high-handed manner, treading upon the heads of ordinary Jews and imposing monetary fines upon them in order to promote their own honor." In answer to the query of a contemporary scholar who complained that certain litigants refused to accept him as dayyan over them, he points out that nowadays "the generations have degenerated, understanding has declined, the dayyanim have deteriorated, and there is not a single scholar in the world who is an acknowledged expert." He attests of himself that "During my whole life l have never acted as judge over any one against his will, and always refrain with all my might from acting as a judge" (no. 146).

R. Jacob b. Judah Weil (d. before 1456), German rabbi and halakhic authority in the first half of 15th century. The name Weil was derived from the town of that name in the Neckar district. R. Weil's main teacher was R. Jacob Moellin (the Maharil), who ordained him and appointed him rabbi of Nuremberg. R. Moellin granted him permission to establish a yeshivah there, but he refrained out of respect for R. Zalman Katz, who had previously been appointed to this office (Responsa Weil, no. 151). It appears, however, that from 1422 he served in both offices. R. Weil also refers to R. Zalman Ronkel of Mainz as "my teacher" and states that he studied in his yeshivah (ibid.). After Nuremberg he was in Augsburg, then in Bamberg for a short period, and from 1444 he was rabbi of Erfurt. Scholars from various communities, including R. Israel Isserlein, addressed their halakhic problems to him. R. Weil became renowned through his volume of responsa (Venice, 1523, frequently republished) which contains 193 responsa. They were copied during his lifetime and some are found among the responsa collections of other rabbis. Particularly well known is his Hilkhot Shehitah u-Vedikah ("laws of slaughtering and examination"), which was accepted as halakhic practice by the Ashkenazim and has been republished more than 70 times. These laws were first published in his responsa, (Venice, 1549) and various scholars, among them R. Solomon Luria (the Maharshal), added glosses, explanations, and novellae. The section Bedikot (Venice, 1552) was first published separately, but from the Mantua, 1556 edition, it was published together with the laws of slaughtering and given the title Shehitot u-Vedikot.