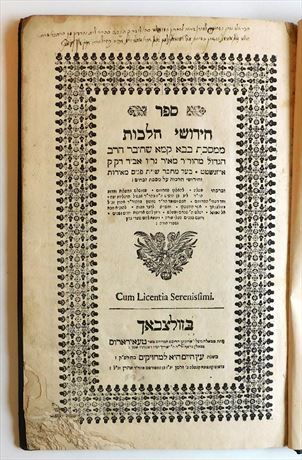 First edition of novellae to tractate Bava Kamma by R. Meir b. Isaac Eisenstadt, ("MaHaRaM ASH"-Morenu Ha-Rav Meir Ash [short for Eisenstadt]; c. 1670–1744), Polish rabbinical authority. After serving as rabbi in Szydlowiec in Poland, he settled in Worms, where Samson Wertheimer appointed him head of the yeshivah. On the occupation of Worms by the French in 1701, he went to Prossnitz, Moravia, and there he was appointed rabbi. Among his disciples was R. Jonathan Eybeschuetz, whom he brought up after the death of the latter's father. In 1714, with Wertheimer's support, R. Meir was appointed rabbi of Eisenstadt and its "seven communities", which by then had recovered from the expulsion of 1670 and from the havoc wrought by the Kurucz uprising (1704). Students from far and near flocked to the yeshivah which he had established. He fashioned the character of the community, which became distinguished for its piety, so that men of wealth and influence in nearby Vienna sought "right of residence" in Eisenstadt. In 1723 R. Meir was obliged to leave the community for a short time because of "informers and calumniators." Upon his return he instituted a special prayer to be recited every Monday and Thursday, against "those who bring harm to Israel by their tongues and tear down the foundations of the community." R. Meir issued a ban against card playing (except on Hanukkah and Purim). His works include Panim Me'irot, responsa and novellae on the Talmud (Amsterdam, 1715). His responsa, containing questions addressed to him by R. Akiva Eger, R. Moses Harif of Pressburg, and even rabbis of Italy and Turkey, testify to his wide authority. Other works are Kotnot Or, a homiletic commentary on the Pentateuch and the Five Scrolls, published together with Or Hadash, the commentary of his grandson R. Eliezer Kallire, under the general title of Me'orei Esh (1766).