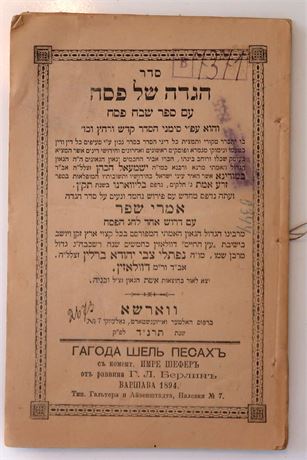 With the commentary of R. Ishmael b. Abraham Isaac ha-Kohen (1723–1811), rabbi of Modena. R. Ishmael ha-Kohen enjoyed a high standing in the Jewish world generally and was the last Italian rabbi who was accepted throughout the rabbinic world as a halakhic authority. He was among those to whom R. Naphtali Hirsch Wessely appealed in his Divrei Shalom ve-Emet (Berlin, 1782) to defend the introduction of secular studies in Jewish schools. Though formally disassociating himself from the ideology of the maskilim, in practice he concurred with it. It is of note that he occasionally wrote secular poems. R. Ishmael was among those invited by Napoleon to answer questions put to the Assembly of Jewish Notables which took place in Paris in 1806. From his replies on this occasion as well as from his other halakhic rulings, both published and in manuscript, he emerges as a rabbi alive to the needs of the times and inclined to narrow the gap between them and traditions. His realistic and moderate approach is clearly revealed in his responsa published under the name Zera Emet (pt. 1, Leghorn, 1785; pt. 2, ibid., 1796; pt. 3, Reggio, n.d.), see especially pt. 1, nos. 69, 74, and 89; pt. 2, no. 107; and pt. 3, nos. 32, 33, and 42. Many responsa remain unpublished.

With commentary Imre Shefer by R. Naphtali Zevi Judah Berlin (ha-Neẓiv, 1817–1893) was one of the leading rabbis of his generation, and head of the yeshivah at Volozhin for some 40 years. He was born at Mir and already in his early youth was famed as a great talmudic scholar. In 1831 he married the daughter of R. Isaac b. Ḥayyim Volozhiner who headed the large and important yeshivah in that town. When R. Isaac died in 1851 he was succeeded by his elder son-in-law Eliezer Isaac. When the latter died in 1854, R. Berlin succeeded him, transforming that institution of learning into a spiritual center for the whole of Russian Jewry. In his day, the yeshivah at Volozhin was attended by more than 400 students, among whom were many men of great talent and unusual intellectual caliber. He taught the whole of the Babylonian Talmud in the order of its arrangement, without omission and with a commentary of his own, in which he followed the system and method of R. Elijah b. Solomon the Gaon of Vilna. He avoided hairsplitting pilpul, being concerned only with determining the plain meaning of the text as well as establishing its accuracy by reference to parallel passages in the Jerusalem Talmud and in the halakhic Midrashim. Early in life he wrote a commentary on Sifrei (published 1959–61 in Jerusalem, in three volumes, under the title Emek ha-Neẓiv). He ascribed great importance to the study of geonic literature and the works of the early authorities who lived close to the time of the Talmud. This accounts for his special interest in the She'iltot of R. Aḥa of Shabḥa which he published with a commentary. It was the most comprehensive of its kind on this work, and was titled Ha'amek She'elah (Vilna, 1861, 1864, 1867; second edition with addenda and corrigenda from R. Berlin's manuscripts, Jerusalem, 1948–53). R. Berlin also devoted considerable attention to the interpretation of the Scriptures, following again in the footsteps of the Vilna gaon. In the yeshivah he gave a daily lesson in the weekly portion of the Reading of the Law, an unusual innovation in the yeshivot of his day. His commentaries on the Torah, Ha'amek Davar, were published (Vilna, 1879–80; second edition with addenda from manuscripts, Jerusalem, 1938) as were those on the Song of Songs, Rinnah shel Torah (Warsaw, 1886).

R. Berlin dedicated his energies to that institution adamantly opposed any modernization of the yeshivah and the introduction of secular studies in its curriculum, as demanded by the maskilim in Russia, who were supported by the authorities. He feared that such innovation might detract from the purpose and mission of the yeshivah – the education of scholars of the traditional type. He did not negate secular learning per se, but regarded the study of the Torah and the production and maintenance of talmudic scholars as the very foundation of Jewish existence. He exhibited the greatest solicitude over any form of neglect of Torah study and professed a fatherly love for all his students, who in turn admired and revered him greatly, including those who later departed from his way of life and outlook. He wrote many detailed responsa to questions arriving from various communities throughout the world on matters of halakhah and on general public affairs. A small part of his responsa was collected in his Meshiv Davar (2 vols., Warsaw, 1892) which revealed his general breadth of outlook. He completely rejected the demand of certain religious circles to establish separatist orthodox communities, stressing that "such advice is as painful as a dagger in the body of the nation," for all Jews are commanded to form "one union" (Meshiv Davar, vol. 1 responsum 42). In many letters he urged observant Jews to join the movement and to support the settlement of Jews in Ereẓ Israel, even though some were nonobservant. At the same time, he stressed that "our contributions do not go to settle the land of the Philistines, but to restore the desolation of our Holy Land… so that the Torah and the precepts be observed among its inhabitants" (Meshiv Davar, vol. 2, responsum 50, on shemittah). With that end in view, he urged that a religious person be appointed supervisor of the settlers in the colonies in Ereẓ Israel to ensure they conduct themselves in accordance with the Torah and the precepts. He also suggested that "secular" members of the Jewish settlements (referring to the Bilu'im in Gederah) be enabled to return to their countries abroad and that their place be taken by observant Jews from the old yishuv in Jerusalem. Later, however, he withdrew this suggestion, and even defended the Bilu'im because they had "improved their ways." R. Berlin was opposed to the permission granted by other rabbinic authorities for fields to be worked during the sabbatical year by means of the legal fiction of "selling" the land to non-Jews. In his last years, he came into conflict with the Russian authorities as a result of their instructions both for a reduction in the number of students at the yeshivah of Volozhin and the introduction of secular subjects, especially the study of Russian, in the curriculum. Very much against his will, he reduced the student roll somewhat and introduced the study of Russian. However, even after these steps, the number of students at the yeshivah remained double that permitted by the Government, with few students among them attending the lessons in Russian. As a result the yeshivah was closed down by government decree in 1892 and Berlin and his family were exiled. They moved first to Minsk and later to Warsaw. The closing down of the yeshivah seriously affected his health and he was unable to carry out his desire to settle in Ereẓ Israel. He died in Warsaw about 18 months after his departure from Volozhin.