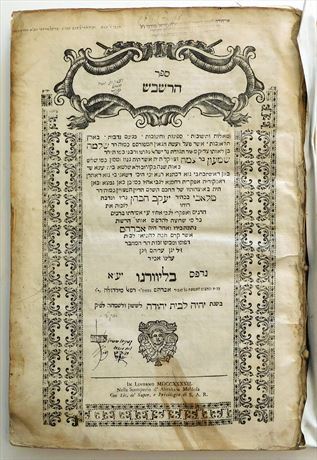 Responsa which deal not only with the legal matters but also with some philosophical problems and contain explanations of some biblical and talmudic passages.

R. Solomon b. Simeon Duran (known as RaShBaSh, Hebrew acronym of R. Shelomo ben Shimon; c. 1400–1467), North African rabbinical authority; son of R. Simeon b. Zemah Duran. He was born in Algiers, but no details are known of his youth. His education embraced not only rabbinical knowledge but also science, medicine, and philosophy. It appears from his responsa that he joined his father's bet din at an early age and was the head of the yeshivah. Some of his responsa were written during the lifetime of his father. His apologetical work Milhemet Mitzvah (1438) was written with his father's authorization. In it R. Solomon repulsed the accusations against the Talmud made by the apostate Joshua Lorki (Geronimo de Santa FM) and even made counterattacks against the Christian clergy. He showed that Lorki's accusation that the Talmud favored immorality was wrong, and on the contrary that it teaches a high standard of morality and chastity; and that it was the Christian clerical circles who indulged in immoral conduct to such an extent that it became known by the name "peccato dei frati." After defending the halakhic parts of the Talmud he proceeded to explain the aggadot attacked by Lorki. In Solomon's view (as expressed already by Jehiel b. Joseph of Paris and by Nahmanides in their disputations) they had no binding force.

In his youth he wrote a rhetorical epistle (melizah) to Nathan Najjar in Constantine (Rashbash, no. 259) using talmudic idioms, style, and language (the use of this kind of melizah is characteristic of him). His letter made a deep impression upon Najjar as can be seen from his reply in which the following passage occurs: "My son, my son, my heart was filled with anxiety for I said 'Who will sit on the throne of my master the rabbi, your father?'... Now, however, I know that Solomon, his son, will reign after him and will sit upon his throne" (cf. I Kings, 1:13, 17, 30). After his father's death Solomon was appointed rabbi of Algiers. He seems to have also been the head of a yeshivah and some of his pupils were mentioned by name. His religious and general outlook can be derived from his responsa. Thus when asked whether the dialogue of Balaam and his ass (Num. 22:28), Jacob's wrestling with the angel (Gen. 32:25), and the visit of the angels to Abraham (Gen. 18:1ff.) took place in reality or were dreams, his reply was that all were real events, as Nahmanides had already stated (Rashbash, no. 44). In responsum no. 3 he strongly criticized Haggai b. Alzuk in Mostaganem, who maintained that perfection of the soul could be achieved by perfection of the intellect and that aliyah to Erez Israel had no effect. In his view settling in Erez Israel is a great mitzvah, particularly as many religious commands concern only Erez Israel. With regard to the question whether the world will be destroyed or not, he showed that the Talmud and Nahmanides decided in the affirmative, while Maimonides' view was in the negative. Solomon thought that while the belief in creation ex nihilo is binding, belief in the ultimate destruction of the world is not; it is left to one's own discretion (responsum no. 436). Concerning the Kabbalah he said of himself (no. 36): "I am not one of its members" and expressed his indignation at the doctrine of the ten Sefirot (no. 188). His decisions were quoted by later authorities (including R. Joseph Caro and R. Moses Trani).