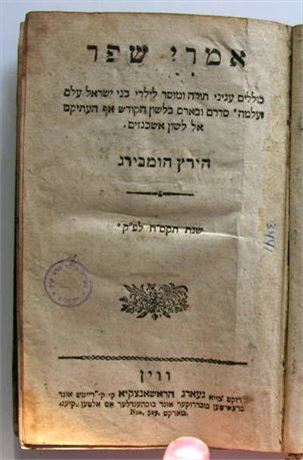 With the approbation of R. Mordecai Benet, probably forged as in Homberg's other works.

Catechism for young people in Hebrew and German by Naphtali Hertz Homberg (1749–1841), pioneer of the Haskalah movement. Born in Lieben near Prague, he attended the yeshivot of Prague, Pressburg, and Gross-Glogau, subsequently going to Breslau. In 1767 he began to learn German secretly and later studied languages and mathematics in Berlin and Hamburg. Influenced by the ideas of Jean-Jacques Rousseau, Homberg turned to pedagogy and in 1779 became tutor to Moses Mendelssohn's son Joseph. In 1782 he moved to Vienna, attracted by the educational activities initiated by the government following the toleration edicts issued by Joseph II.

In 1787 the Austrian authorities appointed Homberg superintendent of the German-language Jewish schools in Galicia and assistant censor of Jewish books. In this capacity he wrote Iggeret el Ro'ei Seh Pezurah Yisrael (addressed to the rabbis in 1788) proposing that Jewish education should be adapted to European culture, and advocating the teaching of Hebrew grammar, German, and handicrafts, and showing special concern for education of the poor. Homberg threatened the rabbis that if they did not adapt themselves to his principles the government would force them to do so. Considered the expert on Jewish affairs in government circles, he was called temporarily to Vienna in 1793 to elaborate suggestions for the reorganization of Jewish life, which served as the basis for the Bohemian Systemalpatent of 1797 and for this he was rewarded with an imperial gold medal. He regarded as the ultimate goal "to forsake all prejudices and achieve complete union with the Christians."

Homberg compiled a list of Jewish books to be prohibited or censored. It included many kabbalistic works and works of moral instruction, most hasidic writings, and even the prayer book. He prepared for publication a version of Ze'enah u-Re-enah in Hebrew characters, adapting it to his opinions; although approved by the government censorship, it was not printed (the manuscript is in the National Library in Jerusalem). When the candle tax was introduced in Galicia (1797) Homberg supported it, and was accused of securing for himself a portion of the revenue. For this reason, as well as an additional charge of embezzlement, he was forced to leave Galicia in 1802 and went to Vienna as censor of Jewish books there. His repeated applications for permanent residence were rejected, although he argued in his favor that his four sons had adopted Christianity.

In 1814 Homberg moved to Prague where he became teacher of religion and ethics in the German-language schools with Peter Beer, and inspector of Jewish home tutors. In 1812 he published a catechism in German, Benei Zion, which was made a compulsory textbook in all Jewish schools in the Hapsburg dominions. All young couples applying for a secular marriage license in Bohemia and Moravia were required to take an examination in it. Most Jews of Galicia resisted the law and were married in a religious ceremony without the benefit of the governmental license. In his book Homberg denied the belief in Israel as the chosen people, the Messiah, and the return to Zion, and tried to show the existence of an essential identity between Judaism and Christianity. He denied all the traditional Jewish customs. A condensation, Ben Jakkir, also in German, was published in 1814. To its second edition (1826) Homberg appended a summary of the principles of Jewish religion according to Moses Mendelssohn's Jerusalem. He also wrote in this period Ha-Korem, a commentary on the Pentateuch, and commentaries on Isaiah, Jeremiah, and Job, published in Vienna in 1817–18. Homberg incurred the nearly universal hatred of his Jewish contemporaries. Even Moses Mendelssohn, his mentor, had reservations about Homberg's collaboration with the gentile authorities in order to compel acceptance among Jews of his ideas on enlightenment. Similar misgivings were shared by Naphtali Herz Wessely and later Isaac Samuel Reggio. The verdict of H. Graetz was that he was "morally and by performance the weakest" personality in the circles of Enlightenment.