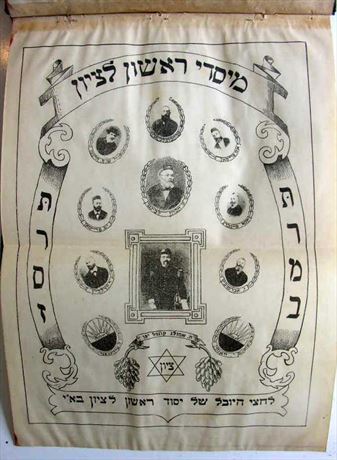 Rishon LeZion was founded on July 31, 1882, by ten Hovevei Zion pioneers from Kharkiv, Ukraine (then the Russian Empire) headed by Zalman David Levontin. Reuven Yudalevich was also a member of the group. The pioneers purchased 835 acres of land southeast of present-day Tel Aviv, part of the townland of the Arab village of Ayun Kara (literally ' fountain of the crier'). Ayun Kara was the scene of a bloody battle between Turkish and New Zealand troops on November 14, 1917. Local citizens carried the wounded to a hospital in Rishon. A stone cenotaph was erected by the people of Rishon LeZion to the memory of the New Zealanders who fell that day, but it has since been destroyed.

The founders faced numerous difficulties. The soil was sandy, water was scarce and the settlers had no agricultural experience. After a well was dug and more pioneers arrived – the Biluim – the colony slowly took shape. Notable members of this group include Fani Belkind, Israel Belkind, Shimshon Belkind, Yoel Drubin, Dr. Haim Hissin, and David Yudilovich. When Baron Edmond James de Rothschild took over, sending in his administrators, major progress was made in the spheres of agriculture, citrus and viticulture. Under Rothschild's patronage, the Carmel-Mizrahi Winery was established in 1886.

David Ben-Gurion was head of workers' union at the winery before later becoming Israel's first Prime Minister. The first Hebrew school in the country opened in Rishon LeZion in 1886.Dov Lubman Haviv taught there and Mordechai Lubman Haviv was an educational inspector. Eliezer Ben-Yehuda, known as the father of modern Hebrew, was a teacher in Rishon LeZion. In 1890, Rishon LeZion had a population of 359. Five years later, the figure had risen to 380, and by 1900, to 526. In 1911, 4,000 dunams of land in Rishon LeZion were planted with grapes and 254 dunams with other fruit orchards.

Development was hindered by the lack of a water source. Baron Rothschild brought in experts who located water at 42 meters below ground. The groundwater table in the area was found to be uneven and wells were mostly constructed at between 20 and 25 meters in depth. Orchards were then developed around the settlement, and by the late 1920s the city developed a burgeoning citrus industry.

In 1924 the British Army contracted the Palestine Electric Company for wired electric power. The contract allowed the Electric Company to extend the grid beyond the original geographical limits that had been projected by the concession it was given. The high-tension line that exceeded the limits of the original concession ran along some major towns and agricultural settlements, offering extended connections to the Jewish settlements of Rishon Le-Zion, Nes-Ziona and Rehovot (in spite of their proximity to the high-tension line, the Arab towns of Ramleh and Lydda remained unconnected).

The city may in the future host a new international airport, which will replace Ben-Gurion International Airport and Sde Dov Airport. Under a plan currently being considered, a new international airport will be constructed on a marine platform built two kilometers (1.2 miles) off shore of Rishon LeZion, the terminals and cargo docks will be built onshore near a highway intersection, which will be linked to the airport by fast trains or buses traveling along a pier.