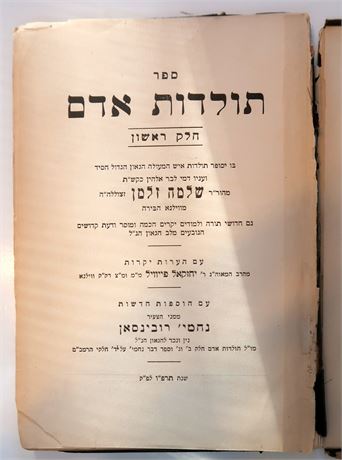 Multi-part work comprised from and about R. Solomon Zalman of Volozhin by R. Ezekiel Feivel ben Ze’ev Wolf (1755–1833). It contains details of R. Solomon's life and his teachings as well as stories current about him, and is a unique work for its period, reflecting the widening of the horizons of Hebrew literature in Lithuania at the end of the 18 century. R. Ezekiel sharply censures those rabbis who neglect study of the Scriptures as a result of their preoccupation with the Talmud and codes. This edition of Toledot Adam is part one, and contains additions and novella from R. Nehemia Rubinson. There is an introduction from R. Rubinson followed by R. Ezekiel Feivel’s introduction and then the text. An example of the tales about R. Zalman in Toledot Adam is that Rav Zalman was an early starter – at the age of one his mother taught him to say shehakol before drinking milk. After his father sent him to cheder at two and a half years, he developed such an overwhelming love for the alef-beis that he carried a sefer with him everywhere, reading all its alefs from cover to cover, then all its beises and so on.
R. Hayyim of Volozhin related how his four year old brother once saw his parents preparing a siyum for his older brother, Rav Simcha, who had learned the entire Mishnayos by heart. “My brother Rav Simcha may know this small sefer by heart,” he announced, “pointing to a miniature Mishnayos on the table, “but I will one day know every sefer by heart whether small or large.” Noticing that his parents were surprised at this outburst, Rav Zalman continued, “Why are you surprised? Didn’t I learn the entire Torah and engrave it on my heart before the angel forced me to forget it? Similarly, I can be confident in my ability to remember and am certain that if I learn and review the Torah sufficiently it will be embedded in me my whole life.”  At eight years old it seemed his premonition was correct when his cheder rebbe tested him on masseches Sukkah and discovered that he knew every massechta being learnt in the cheder.

The author, Ezekiel Feivel ben Ze’ev Wolf (1755–1833) was a Lithuanian preacher, known as the "maggid of Deretschin." R. Ezekiel was born in Planaga, Lithuania. In his youth he was appointed preacher in his native town and, subsequently, in Deretschin. At the age of 19 he was an itinerant preacher in the Jewish communities of Galicia, Hungary, and Germany (where he remained for some time in Breslau). In Vilna he made the acquaintance of R. Elijah ben Solomon (the Gaon of Vilna) and through him, of R. Solomon Zalman of Volozhin, brother of R. Hayyim b. Isaac of Volozhin. R. Solomon made a deep impression upon Ezekiel, who wrote his biography (Toledot Adam). In 1811 Ezekiel accepted an invitation to become the "maggid" (official preacher) of Vilna, a post in which he served until his death. Other works by Ezekiel are Musar Haskel (Dyhernfurth, 1790), an exposition of Hilkhot De'ot and Teshuvah of Maimonides, and a commentary Be'urei Maharif (i.e., Morenu ha-Rav Ezekiel Feivel) on the Midrash Rabbah to Genesis, Exodus, and Leviticus, which was published in Vilna together with the text in 1878. A third volume of Toledot Adam remains unpublished.