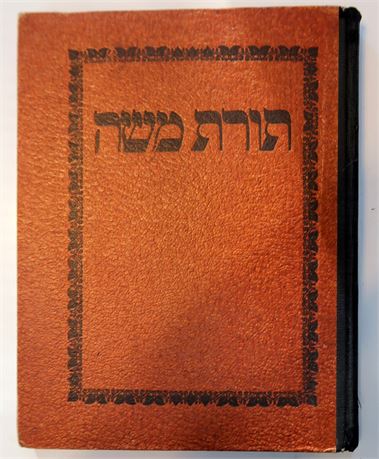 Printed with the assistance of US funds for Holocaust survivors in the US Zone of Germany.

Commentary to the Pentateuch, homilies, and expositions by R. Moses Sofer (known as Hatam Sofer; 1762–1839). He was born in Frankfort and his two most important teachers there were R. Phinehas Horowitz and R. Nathan Adler. When, as a result of the opposition to his innovations and departure from accepted custom, R. Adler was forced to leave Frankfort, R. Sofer, his loyal disciple, then 19 years of age, accompanied him on his wanderings. Although R. Sofer never returned to his native town, he was always proud of it, and used to sign himself "Moses ha-Katan [the insignificant] of Frankfort on the Main." He served first as rabbi of Dresnitz (Moravia) and of Mattersdorf, and in 1806 was appointed rabbi of Pressburg, at that time the most important community in Hungary, where he remained for the rest of his life. His appointment to this high office came as a result of the reputation he had acquired by virtue of his oustanding scholarship, moral character, talent and leadership, and a mystical religious fervor which he had acquired under the influence of R. Adler. There already existed in Pressburg an appreciable minority of maskilim who unsuccessfully opposed his appointment. However, the opposition was not completely silenced, and R. Moses Sofer did not have a tranquil time.

During his 33 years there R. Sofer founded his famous yeshivah, the largest since the Babylonian yeshivot, and made it the center from which to organize Orthodox Jewry in its struggle against the Reform movement. Despite the expansion of his yeshivah and his great influence, which spread far and wide, he was continuously conscious of the growing tension between the traditionalists and the groups which sought a more liberal interpretation of Judaism in order to come to terms with the "spirit of the times." His qualities enabled R. Sofer to become the undisputed religious authority in his own town. As a result, unlike the case in other large European cities, the innovators were not triumphant. He declared total war with no concessions in the battle against modernity. Though it gave him no pleasure to engage in conflict ("There are no quarrels without wounds," Response, pt. 6, no. 35), he waged the battle of Orthodoxy vigorously, resourcefully, and with diplomatic skill. He adopted the long-range plan of strengthening educational and communal institutions and disseminating Torah study ("It is a time to act for the L-rd, increase your Torah," ethical testament; the appointment of his best disciples to rabbinic posts and the strengthening in general of the status of the rabbinate; the formation of a joint front with the hasidic movement; and the winning of the confidence of the government in the loyalty of Orthodox Jewry. Nevertheless, when the need arose he did not abstain from also utilizing the methods of propaganda and even demagogery, by witty epigrams and slogans with which he mercilessly belabored his opponents. These methods were decisive for the Jews of Central Europe, sharpening the division and creating an irreparable breach between the Orthodox and the non-Orthodox sectors. Although he was one of the few rabbis who foresaw this consequence, he nevertheless deliberately adopted this policy. Among the many pungent and pointed epigrams which R. Sofer coined, and which became the slogans of the Orthodox, the best known is his application of the talmudic dictum "Hadash asur min ha-Torah" to mean that any innovation, even though from the point of view of halakhah it is unimportant, is strictly forbidden simply because it is an innovation.

This extreme view had its source in his profound and unstinted admiration for the classic rabbinic literature to its most minute detail, including every hallowed custom, as it existed in the German-Polish way of life at the end of the 18th century. He was convinced of the inner perfection of that way of life, and of its essential superiority to the prevalent culture, despite the tremendous resurgence of this culture and its massive achievements. Since modernism by its very nature nurtured within itself a distinct threat to every type of traditional institution, he instinctively shrank from it a priori. As a result he obstinately opposed the new type of school founded by the maskilim in particular and the doctrine of Moses Mendelssohn in general, although in principle he was not opposed to secular studies where they were undertaken purely for the needs of the traditional way of life or for the sake of livelihood. Similarly he dissociated himself from the battle for emancipation, not merely because he feared the heavy price that would be exacted for it at the cost of tradition, but because he viewed the very aspiration for equality as a sign of dissatisfaction with the traditional way of life of the community and a desire for partial assimilation with gentile culture. He finally brought to an end the debate which was being hotly waged as to whether the Shulhan Arukh was still to be regarded as the final authoritative code. The principle of complete submission to the Shulhan Arukh became one of the fundamental doctrines of Orthodoxy. In addition he ruled that from then onward no distinction existed from the point of view of their religious importance between an insignificant custom and an explicit biblical prohibition. R. Sofer's attitude made him the undisputed leader of the rabbis of Europe who organized themselves between 1817 and 1821 to frustrate the first efforts of the Reform movement in Berlin, Hamburg, and Vienna. From this struggle which, as a result of his direction, ended in partial success, R. Sofer emerged as the recognized leader of Orthodoxy, a status which he maintained until the end of his life.

R. Sofer's first wife died childless in 1812. Some months later he married the daughter of R. Akiva Eger, later rabbi of Posen, who was considered the greatest talmudist of his time. Their children formed one of the best-known rabbinic families. In his will, R. Sofer appointed his eldest son, R. Abraham Samuel Benjamin Wolf, to succeed him as rosh yeshivah. Shortly before his death he indicated to the community his desire that R. Abraham be appointed his successor in the rabbinate during his own lifetime. Although his son was only 24 at the time, R. Moses Sofer's request was granted. Thenceforth the Pressburg community became the heritage of the Sofer family dynasty. R. Simeon, his second son, was apointed rabbi of Cracow where he founded the Orthodox organization, Mahzike Hadas. R. Solomon Zalman Spitzer, his son-in-law, was rabbi of the Orthodox congregation in Vienna.