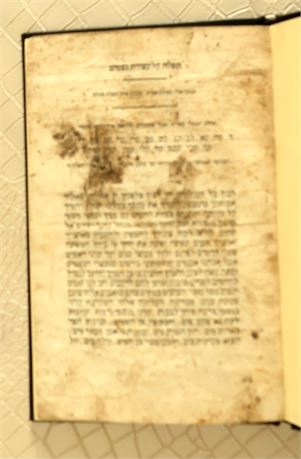 Unrecorded - no other known copy

Prayer for rain to be recited twice daily during drought in Niederrhein, a region around the Lower Rhine section of the river Rhine in North Rhine-Westphalia, Germany between approximately Oberhausen and Krefeld in the East and the Dutch border around Kleve in the West. The prayer was ordered by R. Jacob Maier, rabbi on the Niederrhein Consistorian.

The Israelite Central Consistory of France (French: Consistoire central israélite de France) is an institution set up by Napoleon I by the Imperial Decree of 17 March 1808 to administer Jewish worship and congregations in France. He also directed the establishment of regional Israelite Consistories, subordinate to the Central Consistory, across France. The consistories were ranked as établissements publics du culte (public-law corporations of worship). Given Napoleon's political emancipation of the Jews, he wanted a representative body that could deal with his government.