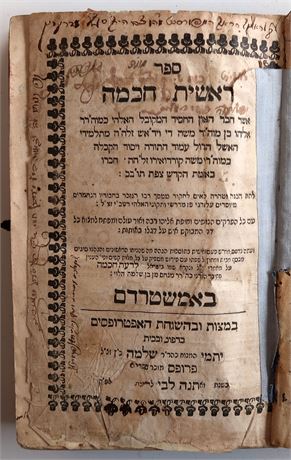 Ethical and moral work by R. Elijah b. Moshe de Vidas (16th century), kabbalist, author on morals, one of the great kabbalists of Safed. R. Vidas was a disciple and close friend of R. Moses Cordovero, whom he always called "my teacher" without mentioning his name. In 1575 he completed his major work Reshit Hokhmah, one of the outstanding books on morals in Judaism. In contrast with previous authors in this field, Vidas included kabbalistic theories in his work, which was aimed at a popular audience; in particular, he quoted at length all that is said in the Zohar on the question of morals and religious conduct. Quotations from the Zohar were annotated from manuscripts still found in Safed. The book is encyclopedic in character and is divided into five long chapters, "Fear," "Love," "Repentance," "Holiness," and "Humility." Vidas added five chapters from Israel Al-nakawa's Menorat ha-Ma'or which was then known only in manuscript. They include chapters on the mitzvot, on education, on business dealings in good faith, and on manners. At the end of these, he added Huppot Eliyahu Rabbah, a collection of rabbinical sayings which list qualities (e.g., "three good qualities..."), and Or Olam, moralizing sayings which open with the word "forever" or with the word "great"; for example, "great is charity, even more than sacrifices."

R. Vidas' book is written in an easy and engaging style, avoiding metaphors. It was immediately accepted as one of the most important books on morals and was printed some 40 times. The first edition was printed in Venice in 1579 during the author's lifetime. The date of R. Vidas' death is still unknown. Because of its great length, his book was summarized several times: Reshit Hokhmah Kazar (Venice, 1600), completed in 1580 in Asti, Italy, by R. Jacob b. Mordecai Poggetti; Tappuhei Zahav, by R. Jehiel Melli (Mantua, 1623); Toze'ot Hayyim (Cracow, before 1650) by R. Jacob Luzzatto, a preacher in Poznan. These three summaries were published many times.