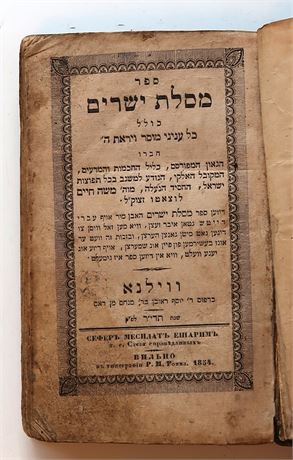 Classical ethical work by R. Moses Hayyim Luzzatto (Ramhal, 1707–1746), Mesillat Yesharim. It was so highly regarded by the Vilna Gaon, (Gr”a) that, that he wrote that if Luzzatto were alive in his generation, he would go to him, from Vilna to Italy, by foot, in order to sit at his feet and learn from him. Gr”a stated that R. Luzzato had a greater understanding of the tenets of Judaism than could be attained by any other mortal.

R. Moses Hayyim Luzzatto (Ramhal, 1707–1746) was a kabbalist, writer of ethical works, and Hebrew poet; leader of a group of religious thinkers, who were mainly interested in the problems of redemption and messianism. R. Luzzatto was born in Padua, Italy, into one of the most important, oldest, and most respectable families in Italian Jewry. Regarded as a genius from childhood, he knew Bible, Talmud, Midrash, halakhic literature, and classical languages and literature thoroughly. While he was immersed in kabbalistic speculations, he suddenly heard a divine voice, which he believed to be that of a maggid (i.e., a divine power inclined to reveal heavenly secrets to human beings). From that moment, the Maggid spoke to Luzzatto frequently and he noted these revelations, which comprised his kabbalistic writings for a few years.