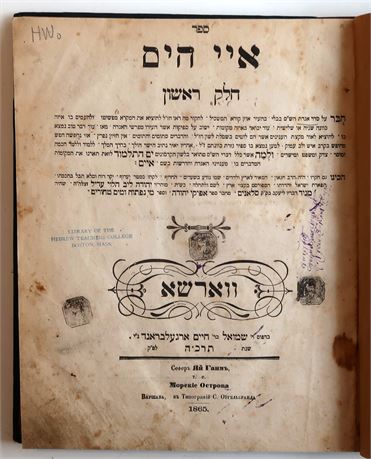 Homilies and novellae to the Ein Ya'acov by R. Judah Leib b. Moses haLevi Edel, Russian preacher; born at Zamoscz, government of Lublin, Poland; died at Slonim 1827. He was a pupil of R. Elijah, Gaon of Vilna, and, besides possessing great homiletic talent, was a Hebraist and a Talmudic scholar. He wrote: "Safah le-Ne'emanim," a concise Hebrew grammar for beginners (Lemberg, 1793); "Afiḳe Yehudah," a collection of homilies, of which only the first volume, containing twenty-four sermons, appeared (ib. 1802); "Me Neftoaḥ," a commentary on Maimonides' introduction to Ṭohorot (Byelostok, 1816); "Mayim Ṭehorim," a commentary on Ṭohorot (ib. 1817); "Iyye ha-Yam," essays on the Agadah, edited by his son Solomon (Ostrog, 1835); "Yam ha-Talmud," casuistic notes; "Redife Mayya," on Hebrew synonyms.

Emet laYa'acov, novellae to Talmud by R. Jacob b. Jacob Moses Lorbeerbaum (c. 1760–1832), Polish rabbi and halakhist. His father, the rabbi of Zborow, died before Lorbeerbaum was born and his relative, R. Joseph Te'omim, brought him up. After his marriage he settled in Stanislav and engaged in business, but devoted most of his time to study. He frequently attended the lectures of R. Meshullam Igra. When after a few years his business failed, he accepted the rabbinate of Monasterzyska where he founded a yeshivah. He was later appointed rabbi of Kalisz where he wrote most of his books and with exceptional humility published anonymously his work on parts of Shulhan Arukh, Yoreh De'ah: Havvat Da'at, a name by which he himself became known in scholarly circles when his authorship came to light. This work was accepted in the rabbinic world as a compendium of practical halakhah, and won him the reputation of an outstanding posek. In 1809 he was invited to become rabbi of Lissa, long a center of Torah in Poland. R. Lorbeerbaum enlarged the yeshivah, to which hundreds of students streamed, among them many who later became great scholars and pioneers of the Hibbat Zion movement such as R. Elijah Gutmacher, R. Zevi Hirsch Kalischer, and R. Shraga Feivel Danziger. Many of R. Jacob's contemporaries turned to him with their problems. During his time the war between the reformers and the rabbis flared up, and R. Lorbeerbaum, together with R. Akiva Eger and R. Moses Sofer, unleashed a vehement attack against the maskilim and the reformers. In Lissa, however, as in other towns of Great Poland that came under Prussian rule after the partition of Poland, the influence of the Berlin reformers grew continually stronger. The schism between R. Lorbeerbaum and a large section of the community eventually became so great that in 1822 he decided to leave Lissa and return to Kalisz. There he devoted his time to study, rejecting all offers of rabbinic posts from large and ancient communities such as Lublin. In 1830 he quarreled with a powerful member of the community who denounced him to the government, compelling him to leave Kalisz. On the way to Budapest, where he had been invited to become av bet din, he passed through the regional town of Stryj and was persuaded to remain there.