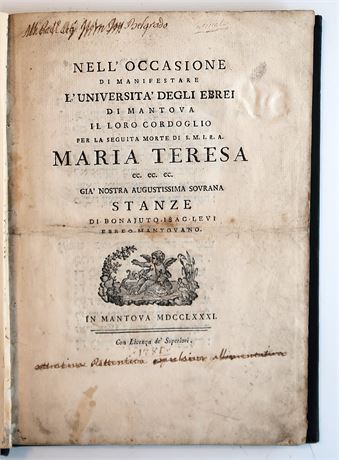 A lamentation in Hebrew with Italian (on facing page) on the demise of Maria Theresa Walburga Amalia Christina (German: Maria Theresia; 13 May 1717 – 29 November 1780). She was the ruler of the Habsburg dominions from 1740 until her death in 1780, and the only woman to hold the position. She was the sovereign of Austria, Hungary, Croatia, Bohemia, Transylvania, Mantua, Milan, Lodomeria and Galicia, the Austrian Netherlands, and Parma. By marriage, she was Duchess of Lorraine, Grand Duchess of Tuscany and Holy Roman Empress.

Maria Theresa started her 40-year reign when her father, Emperor Charles VI, died in October 1740. Charles VI paved the way for her accession with the Pragmatic Sanction of 1713 and spent his entire reign securing it. He neglected the advice of Prince Eugene of Savoy, who believed that a strong military and a rich treasury were more important than mere signatures. Eventually, Charles VI left behind a weakened and impoverished state, particularly due to the War of the Polish Succession and the Russo-Turkish War (1735–1739). Moreover, upon his death, Saxony, Prussia, Bavaria, and France all repudiated the sanction they had recognized during his lifetime. Frederick II of Prussia (who became Maria Theresa's greatest rival for most of her reign) promptly invaded and took the affluent Habsburg province of Silesia in the seven-year conflict known as the War of the Austrian Succession. In defiance of the grave situation, she managed to secure the vital support of the Hungarians for the war effort. During the course of the war, Maria Theresa successfully defended her rule over most of the Habsburg Monarchy, apart from the loss of Silesia and a few minor territories in Italy. Maria Theresa later unsuccessfully tried to recover Silesia during the Seven Years' War.

Though she was expected to cede power to her husband, Emperor Francis I, and her eldest son, Emperor Joseph II, who were officially her co-rulers in Austria and Bohemia, Maria Theresa was the absolute sovereign who ruled with the counsel of her advisers. Maria Theresa promulgated institutional, financial, medical and educational reforms, with the assistance of Wenzel Anton of Kaunitz-Rietberg, Friedrich Wilhelm von Haugwitz and Gerard van Swieten. She also promoted commerce and the development of agriculture, and reorganized Austria's ramshackle military, all of which strengthened Austria's international standing.

However, she despised the Jews and the Protestants, and on certain occasions she ordered their expulsion to remote parts of the realm. She also advocated for the state church and refused to allow religious pluralism. Consequently, her regime was criticized as intolerant by some contemporaries.

R. Azriel Isaac Levi (d.1809) was a rabbi and scribe of the Mantuan community at the end of the eighteenth and beginning of the nineteenth century. It appears he was an extremely versatile poet, able to versify in both the sacred and vernacular tongues.