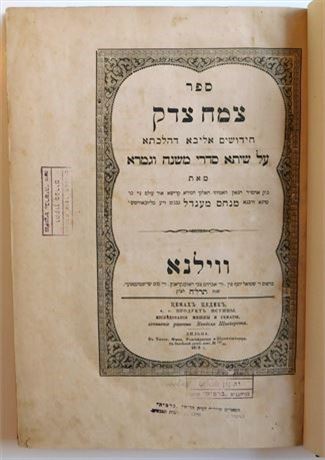 Commentary to Mishna and Talmud by R. Menahem Mendel Schneersohn. R. Schneersohn (1789–1866), grandson of R. Shneur Zalman (son of his daughter) and son-in-law of R. Dov Baer, became the leader of Chabad after his father-in-law's death. Orphaned while young, he was educated chiefly by his grandfather, and from a very early age began to write on halakhah and Hasidism. He wrote numerous books and sermons, most of which remained in manuscript. He was generally acknowledged as one of the greatest Torah scholars of his day. His responsa Zemah Zedek (1870–74, in honor of which he is referred to as the "Zemah Zedek") is a highly esteemed halakhic work. R. Menahem Mendel greatly assisted the Habad settlers in Hebron. The Russian government accorded him the hereditary title of an honored citizen, and he was acknowledged as one of the leaders of Russian Jewry. He fought the assimilationist policy of the government and the adherents of Haskalah who gave it their support. The year before his death, no longer able to fulfill his manifold duties, he assigned them to his sons.