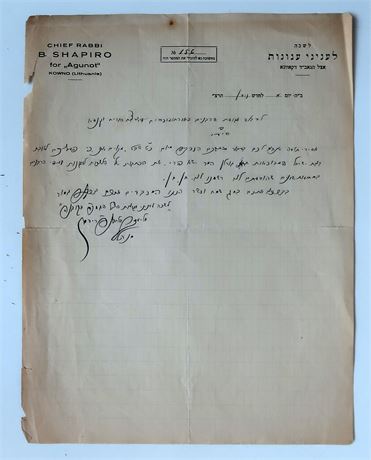 Letter by the secretary of the Agunah Resolution division of the Kovno Bet Din, to the rabbinate in New York on Agunah issues.

An Agunah is a married woman who for whatsoever reason is separated from her husband and cannot remarry, either because she cannot obtain a divorce from him, or because it is unknown whether he is still alive. The term is also applied to a yevamah ("a levirate widow";), if she cannot obtain ḥaliẓah from the levir or if it is unknown whether he is still alive (Git. 26b, 33a; Yev. 94a; and Posekim). The problem of the agunah is one of the most complex in halakhic discussions and is treated in great detail in halakhic literature. It is a basic rule of halakhah that facts are to be determined on the testimony of two witnesses. However, the Mishnah already attributes to R. Gamaliel the Elder the takkanah that when a husband is missing because of war, and his fate is unknown, the wife may be permitted to remarry on the testimony of only one witness to his death (Yev. 16:7). Although somewhat later R. Eliezer and R. Joshua disagreed with this ruling, at the time of R. Gamaliel of Jabneh it was again determined (ibid.) not only that one witness was sufficient but also that hearsay evidence might be admitted, as well as the evidence of a woman, a slave, a handmaiden, or a relative (which classes were otherwise legally incompetent as witnesses). The legal explanation given for these far-reaching rules is that it is to be presumed that a person will not give false testimony on a matter which is likely to come to light, since the husband, if still alive, will undoubtedly reappear sooner or later (Yev. 93b; Maim., Yad, Gerushin 12:15). Moreover, it may be assumed that the wife herself will endeavor to make sure of her husband's death before remarrying, since she will become prohibited to both men if it later transpires that her first husband is still alive, and her other rights, especially pecuniary ones, will be affected too (v. infra; Yev. 87b; Sh. Ar., EH 17:3, 56). Another reason given is that a relaxation of the law is appropriate in times of danger, the possibility that a woman may remain an agunah being deemed to be such a time of danger. Finding a way for permitting an agunah to remarry is deemed a great mitzvah (Responsa Asheri, 51:2). Indeed, an onerous application of the law, without justification, and in cases where there is no suspicion of deception, is regarded not only as a failure to perform a mitzvah, but even as a transgression (Responsa Maimonides, ed. Freiman, 159; Sh. Ar., EH 17:21, Isserles). However, in view of the danger of legalizing a possibly adulterous union, it is customary for an agunah to be permitted to remarry only after consultation with, and consent having been obtained from, other leading scholars (Sh. Ar. ibid. 34; Isserles and other commentators).