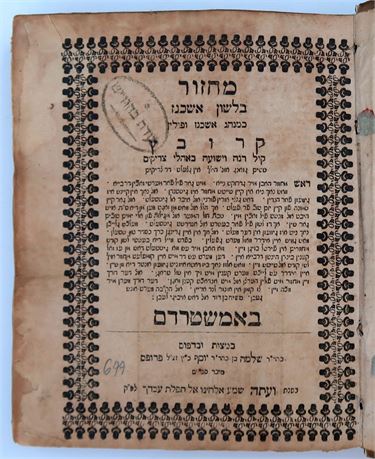 Rare to be found in this good of a condition. Beautiful cooper plate engraving on title verso.

High and Festive Holiday prayer book in Yiddish in Vaybertaytsh font. The title proudly proclaims this to be the first fully corrected edition of same, not lacking a single tehinah for and season. Furthermore, the title states, that this edition has translated many of the important liturgies heretofore never translated. The work was created for women and common folk who could not read Hebrew and only spoke Yiddish.

Vaybertaytsh (Yiddish: װײַבערטײַטש‎, 'women's taytsh') or mashket (Yiddish: מאַשקעט‎), is a semi-cursive script typeface for the Yiddish alphabet. From the 16th until the early 19th century, the mashket font distinguished Yiddish publications, whereas Hebrew square script were used for classical texts in Hebrew and Aramaic, and "Rashi" script for rabbinic commentaries and works in Ladino. Mashket was used for printing Yiddish in the Old Yiddish literature period, and later as the primary script used in texts for and by Jewish women, ranging from folktales to women's supplications and prayers, to didactic works.

Solomon b. Joseph Proops (d. 1734), whose father may have been a Hebrew printer as well, was established as a bookseller in Amsterdam and associated with other printers from 1697 to 1703. In 1704 he set up his own Hebrew press, which produced mainly liturgical books but also a wider range of works in halakhah, aggadah, Kabbalah, ethics, and history. In 1714 Proops began to print a Talmud edition in competition with that planned by Samuel b. Solomon Marches and Raphael b. Joshua de Palasios, but was forced by them to discontinue in view of their prior rabbinic monopoly. From 1715 productions by Proops carried advertisements of books he had published, and in 1730 he issued a sales catalog (Appiryon Shelomo), the first such Hebrew publication. Some of the finest Hebrew editions were printed at the Proops Press in Amsterdam.