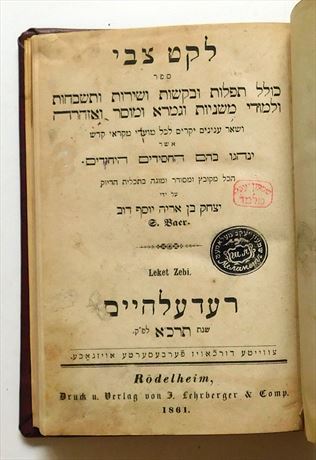 Collection of liturgies and supplications for various times of the year following kabbalistic teachings. The book has enjoyed many editions and is used to this very day. The editor and compiler, Zevi Hirsch b. Hayyim of Furth (1683-1767), was a printer in several German towns.

Re-edited by R. Seligman Isaac Baer. There are facing German and Hebrew title pages. The latter describes the contents as the cantillation for Psalms, Proverbs, Job, according to all the manners and rules. The Massorah according to the principles of the geonim, ben Asher, ben Bilaam, and all the other earlier grammatical masters. Torat Emet received an approbation from R. Shimshon Raphael Hirsch, there are forwards from Dr. I. M Jost and Simeon Gedaliah Oppenheim, prefatory remarks, a table of contents, errata, the author’s introduction, and the text. The volume concludes with a lengthy letter (pp. 54-71) from R. Samuel Luzzatto (Shadal).

Seligman Isaac Baer, (1825–1897), Hebrew grammarian, masorah scholar, and liturgist. Born at Mosbach (Baden, Germany). He may be regarded as a follower of Wolf Heidenheim, thought it seems the two never met. At the age of 19 he turned to masoretic studies. Franz Delitzsch was impressed by Baer's scholarly approach and together they published the Psalms with masorah (1860) followed by most of the other books of the Bible with masorah texts. Delitzsch prefaced each book with a Latin introduction (except the last two which appeared after his death, i.e., Jeremiah in 1890 and Kings in 1895). These masoretic editions were compiled by Baer from manuscripts representing the variants of the masorah of Ben Asher, Ben Naphtali, and other masorah texts. All his life, Baer remained in the humble position of a teacher in the Jewish community school at Biebrich (Rhineland), but on the initiative of Delitzsch he was awarded an honorary Ph.D. by the University of Leipzig (1876). Baer's masoretic Bible edition was generally regarded as a genuine rendition of the traditional masorah text although it also evoked some criticism, notably by C. D. Ginsburg and E. Kautzsch. Baer's masorah text was printed in the widely accepted Vilna edition of the rabbinic Bible (Mikra'ot Gedolot). In addition to Torat Emet he also wrote a book on the secondary accent, the meteg (Die Methegsetzung, 1867); and published Ben Asher's Dikdukei Te'amim (together with H.L. Strack, 1879) and Zwei alte Thorarollen aus Arabien (1870).

Baer's greatest achievement lay in the field of liturgy. His many editions of liturgical texts, in which he followed the example and standards set by Heidenheim, were not only a scholarly feat but added dignity and decorum to Orthodox synagogue services throughout Western Europe, where his editions gained great popularity. The most important of these is his Avodat Yisrael prayer book with a scholarly commentary Yakhin Lashon (1868, several times reprinted, the latest in 1937) which has been accepted as the standard prayer book text by most subsequent editions of the siddur. Besides this major work, Baer edited: Selihot, Kinot, Seder ha-Berakhot (1858), a handbook for mourners, cemetery use, etc., in three versions (Toze'ot Hayyim, 1862; Sefer Gemilut Hasadim, 1880; Derekh la-Hayyim, 1926); Tikkun ha-Sofer ve-ha-Kore, a handbook for scribes and readers of the Torah (1875); a prayer book Tefillat Yesharim (18765, with prayers in German at the end; these also appeared separately as Kol Bat Ziyyon, 18753); Piyyutim (1874); Divrei ha-Berit, circumcision service (1874). Most of these texts are accompanied by a German translation, and some are in two versions for the western and eastern Ashkenazi rites. These handsome little books ran into several editions and were reprinted after World War II.

Baer's only venture into the realm of practical halakhah, a handbook for shohatim (Zivhei Zedek, 1857, with a Yiddish translation; 1862 with a German one), was severely criticized by S. B. Bamberger, chiefly on the grounds that Baer was not an ordained rabbi. Baer also edited Sefer Yesod ha-Yirah (Kobez al Jad, 11 (1895), 1–29).