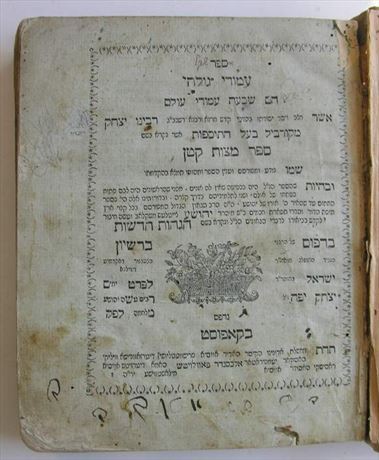 Sefer Mitzvot Katan (Se-Ma-K), "Small" Book of Commandments, for which the Author is mainly known. In this work, he provided the masses with a compendium of contemporary halakhah, interspersed with ethical homilies, parables, and aggadot. He divided the precepts into seven "Pillars," corresponding to the seven days of the week, apparently intending that the work be read through every week. In his enumeration of the precepts and their details, though not in his division of the work, R. Isaac was guided by the Sefer Mitzvot Gadol of R. Moses of Coucy, but he omitted the extensive halakhic discussions of that work. The Semak achieved wide popularity, receiving recognition from outstanding scholars of France and Germany and even being included by some early authorities in the prayer book "so that the precepts could be recited daily... in place of supplications (see Tehinnah) and the reading of psalms." R. Meir b. Baruch of Rothenburg's encomium gained wide circulation for the book in Germany and it soon became an accepted source for the posekim ("codifiers"), particularly R. Aaron ha-Kohen of Lunel and Joseph Colon. In the course of time many annotations (the best known being those of R. Perez b. Elijah of Corbeil) were added; in later editions, these were sometimes merged with the original text and printed as one. The glosses of R. Moses of Zurich were known (but never published) as "The Semak of Zurich;" this consists of a selection from the works of German and French scholars which were added to the Sefer Mitzvot Katan. Sefer Mitzvot Katan was first published in Constantinople (1510) and many times later. Many manuscripts still exist, evidence of its wide popularity.

R. Isaac b. Joseph of Corbeil (known as Semak after his main work; d. 1280), one of the great French codifiers of the 13th century; son-in-law of R. Jehiel of Paris. R. Isaac was renowned for his piety which is reflected in his Sefer Mitzvot Katan. His tosafot to several tractates are also referred to in rabbinic literature. R. Isaac's other writings include his "decisions," collated by one of his disciples from his responsa.

Printed by Israel Jaffe, a disciple of R. Menahem Mendel of Vitebsk and R. Shneur Zalman of Lyady. Jaffe is known for his printing the first editions of many hasidic works of the Besht and the Ba'al ha-Tanya. His attempt to print and entire edition of the Talmud failed as the Slavuta edition appeared at the same time and offered a nicer copy with more commentaries, eventually resulting in the bankruptcy of the Jaffe printing house.