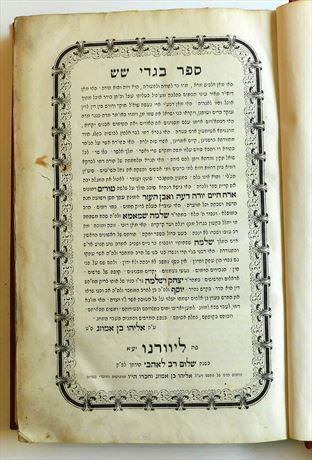 Only edition of these halakhic novellae on three Turim of the Shulhan Arukh by R. Solomon ben Samuel Samama (Shemema). This volume is on Orah Hayyim, Yoreh De’ah, and Even ha-Ezer. Although R. Samama also wrote on Hoshen Mishpat those novellae was not printed and the manuscript, as stated in the introduction, was believed to have been lost. A copy has since been found in the library of R. Moses Raphael Lehmann. Bigdei Shesh was brought to press by R. Samama’s grandsons, R. Isaac and R. Solomon Samama. The work was edited by the distinguished R. Hayyim Lombaroso and R. Nissim Tuviano. There is an introduction from the editors, followed by the text in two columns in rabbinic type.

R. Solomon ben Samuel Samama (Shemama, d. 1855) was the son of the renowned kabbalist, R. Samuel R. Solomon ben Samuel Samama (Shemama), author of Keren ha-Zevi. R. Solomon Samama was known for his acuity and diligence in Torah, not spending an idle moment not learning. He is reputed to have spent equal time with his quill, writing novellae, approximately thirty books being attributed to him. Only four of his works are known today, and of those only Bigdei Shesh was published.