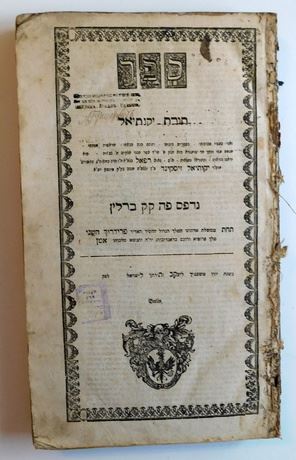 R. Raphael ben Jekuthiel Suesskind Kohen (1722–1803), was born in Livonia and in his youth studied in Minsk at the yeshivah of his relative, R. Aryeh b. Asher Gunzberg, author of the Sha'agat Aryeh. In 1742 R. Raphael was appointed head of the yeshivah, and between 1745 and 1776 he served successively as rabbi of the communities of Minsk, Rakov, Wilkomir, and Pinsk. In 1771, while he was in Berlin in connection with the printing of his Torat Yekuti'el, he was received by the scholars of the city with enthusiasm and was offered the rabbinate, but he refused and returned to Pinsk. From 1773 he served as rabbi of Posen and in 1776 was appointed to the combined communities of Altona, Hamburg, and Wandsbeck. In 1799 he planned to settle in Erez Israel but did not succeed in fulfilling that desire because of the war in Europe, where he remained until his death. He did, however, resign from the rabbinate in 1799 and became a private citizen. The king of Denmark, in whose territory the communities were, sent him a letter of appreciation for the services he had rendered to the community. R. Kohen strongly opposed the Haskalah and Mendelssohn's German translation of the Pentateuch. When Kohen published his Torat Yekutiel (Berlin, 1772), glosses on the first three chapters of the Shulhan Arukh, Yoreh De'ah, Saul Berlin criticized it mercilessly in his Mizpeh Yokte'el (ibid., 1789), charging that the work contained mistakes and errors, forgeries and plagiarisms. A stormy controversy ensued. R. Kohen's colleagues on the bet din of Altona decided to excommunicate Berlin. Various rabbis - among them Mordecai Banet - intervened in the quarrel and protested against Berlin's accusations. His other works include: Ve-Shav ha-Kohen (Altona, 1792), 101 responsa; She'elat ha-Kohanim Torah (ibid., 1792), novellae and expositions on seven tractates of the order Kodashim; Marpe Lashon (ibid., 1790), divided into six "pillars," containing expositions of rabbinic aggadot and ethics; and Da'at Kedoshim (ibid., 1797), 12 sermons in halakhah and aggadah. The last two sermons he delivered in 1799 were published in the Zekher Zaddik (ibid., 1805) of his son-in-law R. Eliezer Leiser Katzenellenbogen-Reiser, which also includes a biography of Kohen entitled Ma'alelei Ish and the eulogies delivered on him. According to his son-in-law, R. Kohen sought to determine the plain sense of the Talmud and the language of the early halakhic authorities in order to trace every halakhah back to its source. He was opposed to those who relied almost entirely on the Codes for halakhic decisions without examining the early authorities, and he insisted on the need to delve into the origin and source of each law. He rejected the "casuistic method which does not accord with the halakhah"; he frequently emphasized his trepidation and hesitation in laying down the law, referring to himself as mi-yirei hora'ah ("one who fears to state the halakhah"), a pun on moreh halakhah ("a teacher of halakhah"). In a problem concerning the permission of an agunah to remarry, he states that if "two more renowned halakhic authorities will agree with me, then I too will join them, but if not, then my words are null and void and I do not wish my decision to be relied upon" (responsa 3 in the appendix to Torat Yekutiel). R. Kohen cites Torah novellae of his son, R. Zevi Hirsch, the av bet din of Krotoschin (Krotoszyn), and of his father-in-law, R. Zevi Hirsch b. Abraham, the av bet din of Posen and Fuerth.