Haphtorah for Sabbath before 9th of Av, Djerba 1914 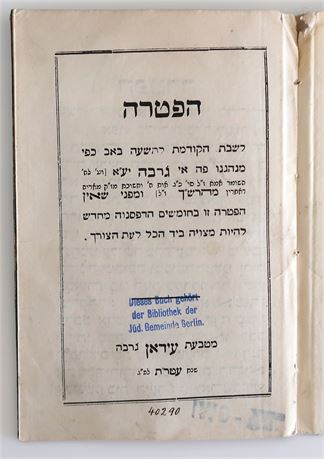 On the Sabbath preceding Tisha B’Av – the day of Jewish mourning for the destruction of both Temples in Jerusalem – a special “haftarah” (reading from the Prophets) is recited in the synagogue. While the majority of Jews read the first chapter of Isiah (1:1–27) the Tunisian custom is to read chapter 22. As chapter 22 does not appear in the standard siddur, the printers sought to provide this pamphlet with chapter 22, The booklet is quite rare, perhaps it was sold out or printed in a small quantity.

Djerba is an island off the coast of Tunisia. In ancient times it was an important Phoenician trading center. According to the local tradition, the Jewish settlement there dates to the reign of King Solomon. A family of priests fleeing Jerusalem in the year 70 C.E. is said to have transported one of the Temple gates to Djerba. It is believed to be enclosed in the synagogue, called al-Ghariba (the extraordinary) of the Hara al-Saghira (the Small Quarter), which is situated in the center of the island, a much frequented place of pilgrimage. The population consisted mainly of kohanim (priests) with a small sprinkling of others, although there were no levites among the residents. According to tradition, the absence of levites on the island is the result of a curse against them by Ezra because they refused to answer his request to send levites to Israel (cf. Ezra 8:15), and they all died. The history of the Jews of Djerba includes three serious persecutions: in the 12th century under the Almohads; in 1519 under the Spanish; and in 1943 under the Nazis. Maimonides, in a letter to his son, expressed a low opinion of their superstitions and spiritual capacity, but praised them for their faith. In the 19th and 20th centuries the yeshivot of Djerba produced many rabbis and writers and they provided rabbis for the communities of North Africa. In 1946 there were some 4,900 Jews in Djerba. Their number dwindled to about 1,500 by the late 1960s, the majority emigrating to Israel and settling on moshavim (many of them on moshav Eitan).