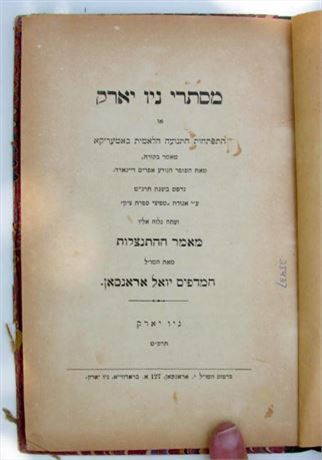 Essay on the development of the Zionist movement in America. Originally intended for his work Sifrat Zion (NY 1899) however due to its heavy polemical content never printed. Deinard in his bibliography (below) derides publication claiming the work was too small , never completed, nor fit for press.

Ephraim Deinard, (1846–1930), bibliographer and Hebrew author was born in Sasmakken, Latvia, Deinard wandered in his youth, collecting ancient manuscripts and books in many countries, and then established a bookshop in Odessa. In 1897 he tried unsuccessfully to found an agricultural settlement in Nevada (U.S.). An active Zionist, he settled in Palestine in 1913 where he investigated the possibilities of Jewish settlement. After being expelled by the Turks in 1916 he returned to the United States and continued his bibliographical work. His two most noteworthy bibliographical works are Or Mayer: Catalogue of the Old Hebrew Manuscripts and Printed Books of the Library of the Hon. Mayer Sulzberger of Philadelphia (1896) and Koheleth America (1926), a listing of Hebrew books published in America from 1735 to 1926. The first part of the latter work contains essays on the state of Hebrew literature in America, which are written in his unadorned, but typically acerbic, style. He laid the foundations of the Hebrew book and manuscript collections of the Library of Congress with the financial aid of Jacob Schiff. A violent polemicist on many controversial subjects, he attacked Reform Judaism, Hasidism, Christianity, and Karaism. Deinard was a prolific Hebrew writer, producing more than 50 books and pamphlets often signed with his pseudonym, Adir.