The Claims of the Jews Equality of Rights, R. Isaac Leeser, Philadelphia 1841 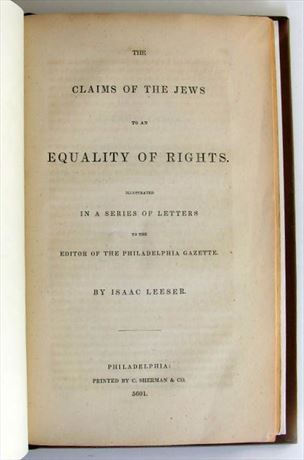 The work contains six essays in an attempt to thwart the efforts of Christian missionaries. "As citizens with equal rughts, not as tolerated aliens, we demand of our fellow-citizens to abate the causeless prejudice which so many entertain for us." (p.82). In The Claims of the Jews Equality of Rights, R. Leeser emerged as a national leader and primary spokesman for American Jewry.

"[R]ecognition of the sermon as an integral part of the synagogue service only came after R. Isaac Leeser (1806-1868) obtained the right to preach regularly in 1843. Leeser published his sermons which were delivered in English to an Orthodox congregation, in Discourses-Argumentative and Devotional (2 vols. 1837) and Discourses on the Jewish Religion (10 vols. 1866-67) ...Leeser was the first to introduce a regular English sermon into the synagogue service. In 1843 he founded the monthly The Occident, the first successful Jewish newspaper. For 25 years, this was an important forum for articles on Jewish life and thought. Leeser was its editor, chief contributor, bookkeeper, and sometimes even typesetter. Leeser founded the first Jewish Publication Society of America and brought many important works to the attention of the American Jewish community. He published the first Hebrew primer for children (1838) , the first complete English translation of the Sephardi prayer book (1848) , and numerous textbooks for children. He founded the first Hebrew high school (1849) , the first Jewish representative and defense organization in 1859 (the Board of Delegates of American Israelites) , Maimonides College, and the first American Jewish rabbinical school in 1867. His major literary achievement was the first American translation of the Bible, a work that took him 17 years to complete, and was published in 1845. This became the standard American Jewish translation of the Bible until the new Jewish Publication Society translation of 1917...Leeser was a traditionalist who did much to stem the tide of Reform. Although he was identified with the Sephardi community his influence affected the entire community and he laid the foundations for many of the key institutions of present-day Jewish life. His contributions to every area of Jewish culture and religion made him a major builder of American Judaism".