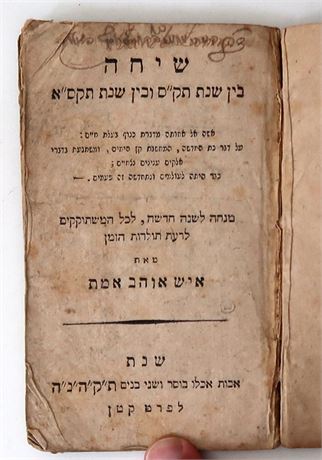 The copy of R. Hayyim Joseph Pollak (1798–1879) with his signature on title. He was an Austrian rabbi, born in Hungary, who officiated at Trebitsch, Moravia from 1828 until his passing. He wrote a commentary, entitled Meḳor Ḥayyim (Presburg, 1849; 3d ed. Warsaw, 1885), on R. Isaac Arama's philosophical work Aḳedat Yiẓḥaḳ, and a biography of the same scholar. Pollak was also the author of a number of Hebrew songs in the annual Bikkure ha-'Ittim, and of a scholarly essay on the Talmudic rules of the יש אם למקרא in Stern's Kebuẓat Ḥakamim, besides being a regular contributor to many Hebrew periodicals. He died at Trebitsch, Moravia.

R. Baruch b. Jonah Jeitteles (1762-1813) was a rabbinic scholar and Hebrew writer who studied with R. Yeḥezkel Landau.  Writing for the periodical Ha-Me’asef during the 1780s and 1790s, Baruch published several poems about the lonesome position of the intellectual. Another of his works, ‘Emek ha-bakha’ (1793), was sharply criticized by the editors of Ha-Me’asef because it was an entirely traditional obituary in memory of R. Landau. R. Baruch responded in his anonymously published Sefer ha-orev (1795), a piece sharply attacking what he considered to be the disrespectful attitudes of radical maskilim. He also anonymously published Siḥah ben shenat 5560 ve-5561 (Discussion between the Years 5560 and 5561; 1800–1801), a polemic against the Frankists in Prague.

Having inherited considerable wealth from his father-in-law, Samuel Porges, R. Baruch set up a private yeshiva and attracted students from Moravia and Hungary. After the battles of Dresden and Kulm (1813), R. Baruch persuaded affluent Jews to establish a private hospital for wounded soldiers “without distinction of religion.” He died while personally caring for the wounded, and his death was eulogized as a patriotic sacrifice.