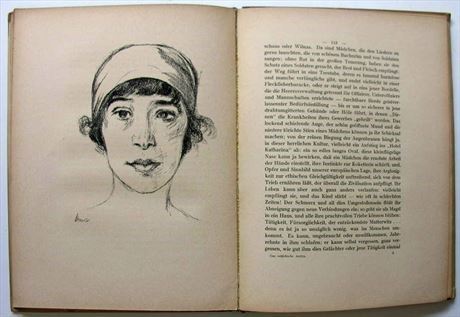 With many sketches by Hermann (Chaim Aharon) Struck - (1876–1944), graphic artist. Struck, born into an Orthodox Berlin family, studied at the Berlin Academy under Max Koner, where Hans Meyer introduced him to the art of etching. Struck joined the Zionist movement at an early age. in 1903, after several study trips throughout Europe, he visited Palestine and, on his way back to Germany, stopped in Vienna and met Herzl. This meeting inspired the famous portrait etching of the Zionist leader. During World War I Struck served with the German army in Lithuania. There he came in contact with East European Jews and was deeply impressed by their way of life. Skizzen aus Litauen, Weissrussland und Kurland (1916) and Das ostjuedische Antlitz (1920) reflect this experience. In 1923 he moved to Palestine and settled in Haifa. Struck's favorite technique was copper etching and its related processes although he did lithographs as well. His early work, done in pure etching, was usually signed with his Hebrew name, Hayyim Aharon ben David. From 1902 he mixed etching with vernis mou and aquatint. A master of his craft and an excellent teacher, Struck taught graphic techniques to such fellow artists as Chagall, Liebermann, Israels, and Corinth. His book Die Kunst des Radierens (1923), a popular guidebook for artists and connoisseurs, provides technical explanations and practical instruction. Struck excelled as a portraitist. Among his sitters were Ibsen, Nietzsche, Freud, and Einstein. He also did landscapes, Jewish types and scenes from Jewish life as well as many ex libris. Struck, who remained an Orthodox Jew, participated in Jewish public life and attended several Zionist congresses as one of the leaders of the Mizrachi Party. He was a member of the London Society of Painters, Etchers and Engravers.