Report of the Anglo-American Committee of Enquiry, London 1946 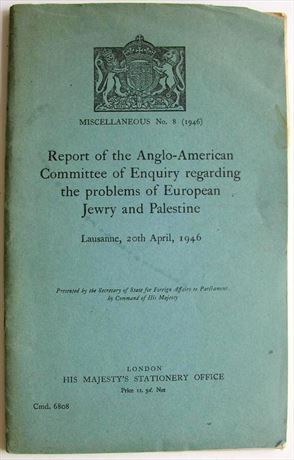 Title: Report of the Anglo-American Committee of Enquiry regarding the problems of European Jewry and Palestine, Lausanne, 20th April, 1946.

The committee, appointed by the governments of the United States and Britain in November 1945 to examine political, economic, and social conditions in Palestine as they bore upon the problem of Jewish immigration and settlement therein and the well being of the peoples now living therein; to examine the position of the Jews in those countries in Europe where they had been the victims of Nazi and Fascist persecution... and to make estimates of those who wished or would be impelled by their conditions to migrate to Palestine or other countries outside Europe; and to make recommendations for ad interim handling of these problems, as well as for their permanent solution. This committee differed from its predecessors in two important respects. First, it represented both Britain and the United States. Of its 12 members, six were British (J. E. Singleton, W. F. Crick, R. H. S. Crossman, F. Leggett, R. E. Manningham-Bullet, and Lord Morrison) and six were Americans (J. C. Hutcheson, F. Aydelotte, F. W. Buxton, B.C. Crum, J. G. Mac-Donald, and W. Phillips), with Singleton and Hutcheson as joint chairmen. Secondly, it connected, for the first time, the problem of world Jewry with that of the Jews in Palestine, thereby tacitly admitting that the Jewish problem and the problem of the Jewish National Home must be seen as one. The committee therefore visited Germany, Poland, Czechoslovakia, Austria, Italy, and Greece, even before it carried out its investigations in Palestine. In its unanimous report and recommendations, the committee found that no country other than Palestine was ready to give substantial assistance in finding homes for Jews wishing or impelled to leave Europe, but that Palestine alone could not solve their emigration needs. It therefore recommended that the U.S. and British governments should endeavor to find new places for the Displaced Persons, in addition to Palestine, and that 100,000 certificates for immigration to Palestine be authorized immediately for the Jewish victims of Nazi and Fascist persecution. Future immigration to Palestine should be regulated according to the Mandate, and the Land Transfers Regulation of 1940 should be annulled and replaced by new ones based on "a policy of freedom in the sale, lease, or use of land, irrespective of race, community, or creed." As for long-term policy, the committee recommended the guiding principle that Palestine should be neither a Jewish state nor an Arab state, and that Jew should not dominate Arab nor Arab dominate Jew. Until the hostility between Jews and Arabs disappeared, the government of Palestine should be continued under the Mandate. In effect, therefore, the committee proposed de facto abrogation of the 1939 White Paper policy. The British government's rejection of the committee's recommendations (in particular the proposal for the issue of 100,000 certificates), despite President Truman's acceptance of the report, led to a further deterioration in the Palestine situation; consequently, the British government turned the whole problem over to the United Nations, which appointed the UN Special Committee on Palestine (UNSCOP).