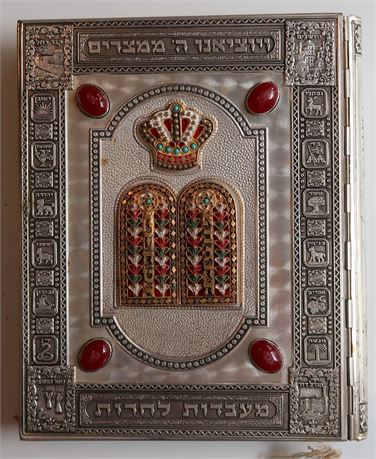 The silvered covers depict holy places, tribal emblems as well as Chad Gadya scenes. Front cover set with 4 blue stones. Facimile of the 1940 vellum original, all written and illustrated by Arthur Szyk (1894–1951), illustrator, miniaturist, and cartoonist. Born in Lodz, Poland, he studied at Cracow and in World War I fought in the Russian army and was taken prisoner; afterward he fought under General Sikorski against the Bolsheviks. Subsequently in Paris, he illustrated books, among them The Book of Esther, Flaubert's Temptations of Saint Anthony, Pierre Benoit's Jacob's Well, and Ludwig Lewisohn's Last Days of Shylock. In 1934 the Polish government sent him to the United States, where he exhibited at the Library of Congress, Washington, D.C., and in many museums. His series of miniatures on the history of the American Revolution was sent as a gift by the Polish government to President Franklin D. Roosevelt. In England, at the outbreak of World War II, he turned his pen to caricatures for British papers and periodicals. In 1940 he went to the U.S., where he drew cartoons lampooning the Nazi leaders. These were collected in a volume, The New Order (1941). He also illustrated books such as the RubFiyFt of Omar Khayyam (1940). Szyk was noted for his refined draftsmanship and calligraphy, in the style of medieval manuscript-illumination, as shown in an edition of the Charter of Kalisz, in a sumptuous edition of the Haggadah (executed 1932–36; published 1940), and in the highly decorated Declaration of Independence for the State of Israel (1948). These were executed in a close imitation of the illuminated manuscripts of the Middle Ages. His colors had the luminosity of Gothic stained glass windows. His Hebrew lettering was superbly decorative and his illuminations sometimes showed a close acquaintance with Jewish legend.