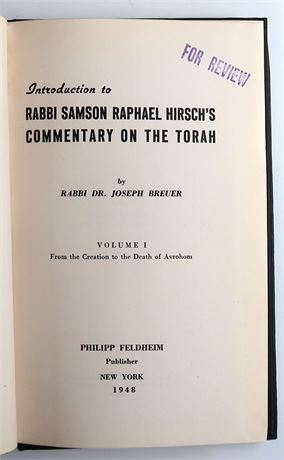 R. Joseph Breuer (1882–1980), Orthodox rabbi; son of R. Solomon Breuer. R. Breuer was born in Papa, Hungary. In 1906 R. Breuer became a lecturer at the yeshivah in Frankfort, heading it after his father's death (1926). He emigrated to the U.S. in 1939 and became head of K';hal Adath Jeshurun in Washington Heights, N.Y., and of its Yeshivah Rabbi Samson Raphael Hirsch (1944), modeled after the Orthodox Jewish community of Frankfort. The kehillah which he headed had its own yeshivah, and kashrut supervision. Regarded as one of the spiritual heirs of Hirsch, his maternal grandfather Rabbi Breuer wrote extensively in German and English defending staunch Orthodoxy.

In New York, R. Breuer took the initiative to start a congregation with the numerous German refugees in Washington Heights, which would closely follow the morale and customs of its spiritual ancestors in Frankfurt. The congregation came to be called Khal Adath Yeshurun (KAJ), but is colloquially called "Breuer's" after its founder. In addition, he founded Yeshiva Rabbi Samson Raphael Hirsch, a yeshiva elementary school and high school named after his illustrious grandfather. It was the first such school in the area that used the vernacular. He also founded a teachers' seminary for women that would be renamed the Rika Breuer Teachers Seminary after his wife's death. All institutions follow the teachings and ideology of Rabbi Breuer's grandfather, Rabbi Samson Raphael Hirsch.

R. Breuer published biblical translations and commentaries on Jeremiah (1914) and Ezekiel (1921); and introductions to R. S. R. Hirsch's Commentary on the Torah (Ger. 2 vols, 1926; Eng. 2 vols, 1948); translations of and commentaries (with text) on the piyyutim for Rosh Ha-Shanah and the Day of Atonement; and wrote Jewish Marriage (Ger. 1923; Eng. 1956). A Jubilee Volume was published in his honor on the occasion of his 80th birthday (Ateret Zevi, Eng. and Heb., 1962, with a bibliography of his writings).